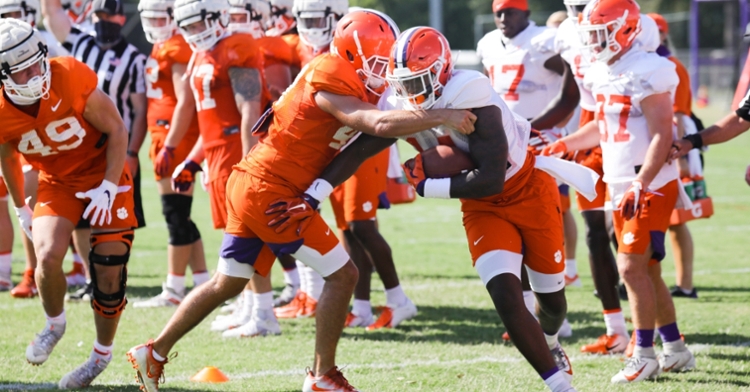 Swinney says Clemson is in "a good place." (Photo per Clemson athletics)

It’s no surprise to Clemson coach Dabo Swinney that his team showed up ready to work and impressed early in fall camp.

The Tigers -- and college football as a whole -- have had to deal with an offseason like no other.

Swinney says he told the team earlier this year that they were ready to handle the challenge.

“I told our guys back in May, ‘We’re built for this. There’s a lot of teams that aren’t built for this, but we are,’” Swinney said on the Packer and Durham show Monday.

And after that long, strange offseason, he has a team committed to playing -- no matter how it happens.

“All 120 of our guys and our whole staff and they’re all here voluntarily. A lot of that is because of the communication and trust that’s been established here for a long time,” Swinney said. “We all understand what we’re dealing with. I think everybody taking ownership of what we do. Hey, if there are no fans -- whatever. We just want to play ball. The reason we’re all here is because we love what we do. A lot of people say it’s financial, well, we’re all still going to get paid if we don’t play. The players are still getting their scholarships and stipends and all that -- everyone could just go sit at home.

“But people don’t ever talk about it -- this is what we love to do. There’s always risk in anything really. We all know that. This is something we all choose to do.”

Swinney has been highly-enthusiastic about his team as camp begins to wind down. Asked about the young playmakers emerging on the defensive line, he took the opportunity to give a rundown on a double-digit number of standouts across the roster, which the ACC Network hosts playfully called him out on.

“We’ve got a fun team. And it’s competitive,” Swinney said. “They are selfless. They are unselfish. They know that if you put the work in and you deserve to play -- you are going to get a chance to play. And that creates competition. And competition leads to consistency.”

Swinney also gave an assessment of his two-deep at this point.

"Everybody is dealing with the same thing," Swinney said of this offseason. "As I've evaluated my team, we're in a good place. We're not quite where we would be had we had a full May and June and I don't think anybody's gonna be. But I think we're way further than what we could have hoped for. That's a credit to the leadership on this team and the commitment that they have as a team and personally -- just their personal pride in how they handle their nutrition and how they were able to continue to train and conditioning and all those type of things when we didn't have access to a lot of things.

"We're in a good place. We've been in camp now for a couple weeks and we're to that point where we have a lot of guys banged up. And we gotta get them back...We're going to be in camp mode this week and next week but those next two weeks will be in game prep-type of environment for us getting ready for Wake Forest."

"Hey, if there's no fans, there's no fans, whatever. We just want to play ball, and the reason we're all here is because we love what we do."@ClemsonFB's Dabo Swinney on his team's commitment to playing this season ??#PackerAndDurham pic.twitter.com/b2HzYaB7pi