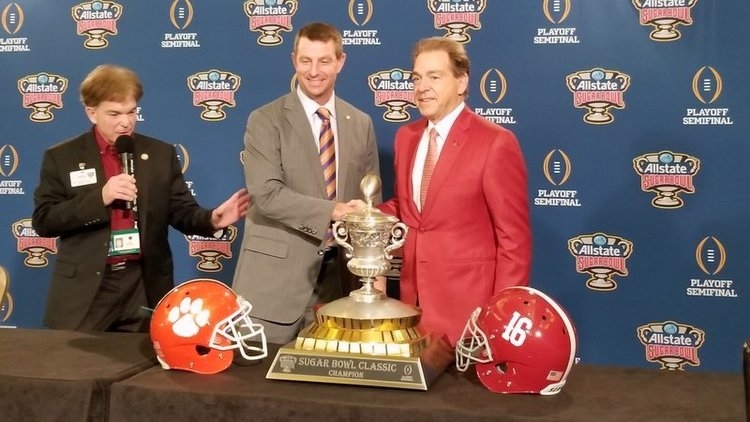 Clemson and Alabama met last year in the Sugar Bowl and need a win to renew the rivalry in the Bay Area.

Call it "rat poison" - call it cheese in a mouse trap, but either way, there's likely some mind games going on in the final Coaches Poll vote for the two Playoff coaches with a ballot.

Alabama's Nick Saban joined Pittsburgh coach Pat Narduzzi as the only Coaches Poll No. 1 votes for Clemson in Sunday's final poll. Conversely, Dabo Swinney picked Saban's Crimson Tide as No. 1, joking Sunday on ESPN that his team was still on the R.O.Y. bus ("rest of y'all").

Despite asserting Georgia as a Playoff team on Saturday, Saban is on the record with a top-4 of Clemson, Alabama, Notre Dame and then Oklahoma, with Georgia and Ohio State next.

Swinney has the same top-6 as the Playoff committee with Alabama, Clemson, Notre Dame, Oklahoma, Georgia and Ohio State. He ranked Syracuse No. 17 and Texas A&M, No. 21.

For Saban and Swinney to meet again in postseason action, No. 2 Clemson will look to advance as a double-digit favorite over No. 3 Notre Dame in the Cotton Bowl (Dec. 29, 4 p.m., ESPN), while No. 1 Alabama needs to hold down No. 4 Oklahoma's prolific offense in the Orange (Dec. 29, 8 p.m., ESPN).

Nick Saban, who said yesterday that Georgia was one of the four best teams, voted Clemson No. 1, Alabama No. 2, Notre Dame No. 3 and Oklahoma No. 4. He put Georgia No. 5.