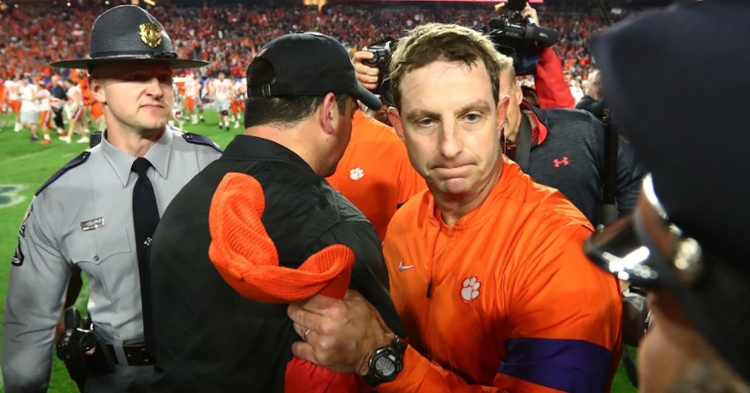 It might be a long offseason for Buckeye Nation.

Ohio State is still fired up about the 29-23 Playstation Fiesta Bowl loss against Clemson.

The team reportedly has a sign that has the final score of the Fiesta Bowl displayed in the Woody Hayes Athletic Center weight room for all the players and coaches to see as a daily reminder and motivation for next season.

Buckeyes head coach Ryan Day made his entire program watch the title game featuring Clemson and LSU from beginning to end according to the website BuckNuts.

"He wanted everyone to think about how bad do they want to play in that game next year and what sacrifices are they willing to make," the site posted.

Day continued to obsess about their playoff loss on Thursday night.

He told the home basketball crowd at halftime of the 62-59 loss against Minnesota that his football team is still stewing about the loss to Clemson.

“That game did not sit well with us," he said. "And you have my word. We’re not going to forget about that game. We're going to do everything we can to keep that game in the back of our minds, so next year, we come back even stronger.”

Good for him to not repress all that sadness on the soul-crushing loss to the Tigers. It was Day's first loss in 17 games as head coach at Ohio State.

I'm not sure why he seems so surprised with the loss as their program is winless against Clemson in four tries including a 31-0 beatdown in 2016.

“That game did not sit well with us. And you have my word we’re not going to forget about that game.” pic.twitter.com/9sxkBRKbOf