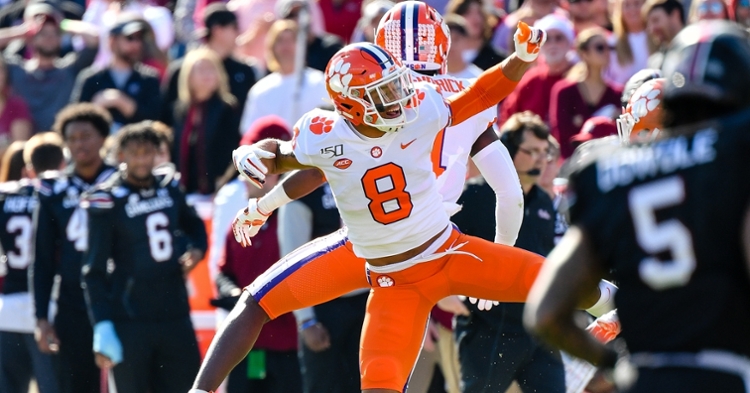 Former Clemson cornerback A.J. Terrell was selected with the 16th pick of the NFL draft's first round by the Atlanta Falcons Thursday.

The Atlanta native was a first-team All-ACC selection as a junior after totaling seven pass breakups, two interceptions and 39 stops. Terrell started each game of the Tigers’ 29-1 run over the last two seasons, tallying six picks, 107 stops and 20 pass breakups in 44 games.

The 16th pick is estimated around $14.3 million and a $7.9 million signing bonus per Spotrac. He is a second Tiger defender off the board this draft after Isaiah Simmons went No. 8 to Arizona.

"You look at AJ Terrell and he has the length and the recovery speed," ESPN's Mel Kiper Jr. said. "He gets a little grabby and that will result in some penalties at the next level...Has to become a little more of a wrap-up tackler. The talent's there, just needs a little bit more coaching."

"He just needs to be a bit more consistent," NFL Network's Daniel Jeremiah said. "This is a guy who can really get up on the line of scrimmage and challenge you in press-man coverage. He has good route-recognition. It's really the last third of the (field) that I struggle with him. As far as his ability to consistently finish. That's where he got into trouble in the national championship (versus LSU). He struggled down the field, playing strong at the catch-point. He'll help the Atlanta Falcons secondary."

He joins Grady Jarrett among Clemson products in the ATL.

One of his more memorable plays as a Tiger got the scoring started in the 44-16 win over Alabama in the 2018 season’s title game.

ESPN ranked Terrell as its No. 6 cornerback prospect going into the draft. He was rated a top-25 overall prospect by CBS Sports and the No. 4 corner.

"This guy is fast. This guy is athletic. We have big expectations for AJ." - Thomas Dimitroff pic.twitter.com/I88zY6cGqX

Became the 59th player to have played for Head Coach Dabo Swinney to be drafted into the NFL, including the 13th first-round pick of Swinney’s tenure.

Was the second Clemson defensive back to be selected in the first-round all-time, joining Tye Hill, who was selected with the No. 15 overall selection by the St. Louis Rams in 2006.

Became the 14th defensive back selected in the Swinney era dating back to the 2009 NFL Draft.

Was selected by his hometown Atlanta Falcons, becoming the first Clemson player selected to play for his home state team since the Falcons selected Georgia natives Vic Beasley (Day 1) and Grady Jarrett (Day 3) in 2015.

Looking forward to seeing a whole lot of this in ATL, @ajterrell_8! pic.twitter.com/DolnYGNfgT

"I think desperation forced this pick."@PriscoCBS believes that the Falcons reached a little bit too much taking AJ Terrell 16th overall.

From a source I talked to, AJ Terrell believed he was going to the Raiders. I thought they might take him at 12, honestly. https://t.co/fkE5abphbt

I love me some AJ Terrell. Thought he was the second best CB in the draft. He is a man to man island ?? corner. Yes he didn’t make a few play in LSU game. But he was all over the best Wr in college football in jamar chase. This kid can stay with anyone.