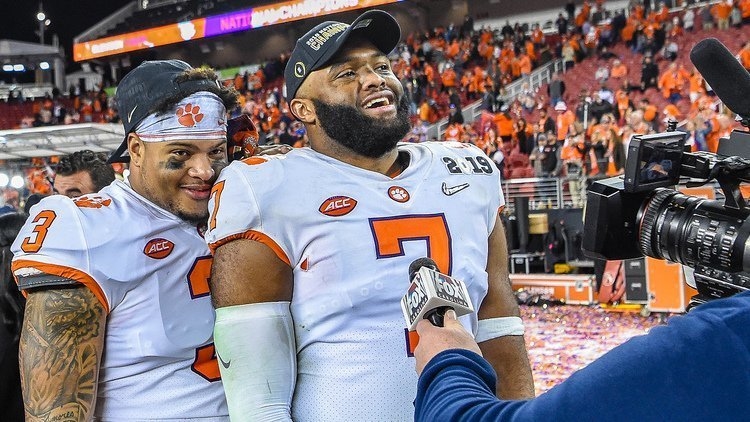 Former Clemson defensive end Austin Bryant was selected with the 15th pick in the fourth round (117 overall) by the Detroit Lions on Saturday.

Bryant was ranked the No. 13 edge rusher by CBS Sports and No. 120 overall going in with projections in the fourth round and after - rated No. 10 on NFL.com's best available on Saturday. Bryant was held out of the NFL combine and team workouts leading up to the draft after surgery for a pectoral injury he played through down the stretch last season.

"He can really set the edge," NFL Network analyst Daniel Jeremiah said. "All power and when you have that big three - he's kind of the forgotten man in the discussion. He's a really good player. If he doesn't have the pec (injury), I think he probably goes in the second round of this draft. Really good value (for Detroit)."

"(Lions coach) Matt Patricia likes to rotate his defensive front frequently and that unit needed depth," NFL.com's Matt Dulgerian said. "Bryant offers some pass rush energy for a defense that had the 5th-lowest pressure percentage in the league last season."

He is the fourth starter from the two-time national champion D-line to be drafted, joining Clelin Ferrell (No. 4; Oakland Raiders), Christian Wilkins (No. 13; Miami Dolphins) and Dexter Lawrence (No. 17; New York Giants) in the pros.

God is always right on time! Can’t wait to get to Detroit and get to work! ONE PRIDEEEE ???? pic.twitter.com/qGDEj8arlT

With the 117th pick, the #Lions select DE Austin Bryant out of Clemson! pic.twitter.com/7EU8NgwKZs

Clemson is the second ACC team in as many years to have it's entire starting D line drafted in the 1st 4 rounds.

From Death Valley to MoTown!

Austin Bryant ?? @Lions in the fourth round with the 117th pick!#NFLDraft | #ALLIN pic.twitter.com/6NnTzkJbjV

Austin Bryant heads to Detroit at No. 117, and four Power Rangers have now fully morphed. The 2019 class of Ferrell, Wilkins, Lawrence and Bryant breaks Lawson, Dodd and Reader's previous school best of three DL picks in a single draft from 2016.

Austin Bryant is a nice pick for the Lions at 117, especially after moving back a few spots. Got that size and length Patricia loves in his edge guys (6-4, 271, 34 5/8-inch arms). They needed a guy who can get to the QB.

I'd draft Austin Bryant just for this play: pic.twitter.com/qvtirFy7PP

A *40-year* drought ends with Austin Bryant's selection by Detroit. The Lions' most recent pick from Clemson was LB Jonathan Brooks in the fourth round of the 1979 NFL Draft.

The @Lions picked up a great player and person in Austin Bryant! Congrats on being drafted and best of luck, Austin! #ClemsonNFL #NFLDraft @_austinbryant7 @ClemsonFB pic.twitter.com/DklRPIEsEI

Austin Bryant on recovering from pec surgery: "I've got a few more weeks left in my rehab."

Doesn't expect to miss any significant time, although rookie minicamp is just a couple weeks away.

Sounds like the Lions envision Austin Bryant playing the JACK role. Makes sense, plays away from his biggest weakness, being top-heavy vs. blocks. He can be "mulitple", to use Patricia's buzzword