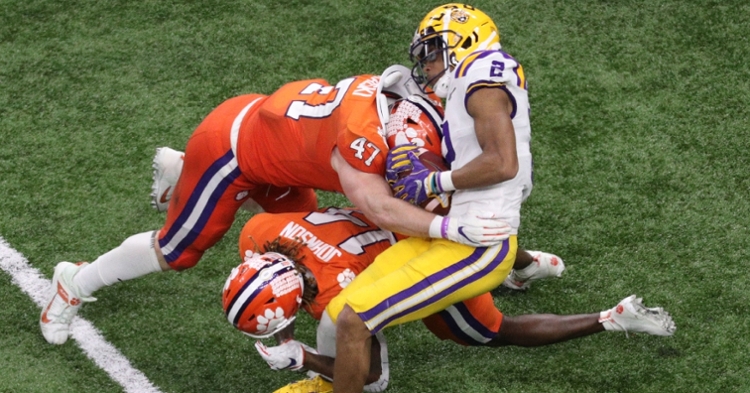 With the new rule, James Skalski could've remained in a leadership role on the sidelines of the championship game post-flag. (Photo: Stephen Lew / USATODAY)

The NCAA Playing Rules Oversight Panel announced its latest round of rule changes for college football next season.

They are in four main areas:

1. Players flagged for targeting will remain disqualified from the game, but instead of being ejected and required to head to the locker room after a targeting foul — which had been the rule since 2013 — players will be permitted to remain in the team area. All other aspects of the targeting rule remain the same. The progressive penalty for targeting also remains: Players who commit three targeting fouls in the same season are subject to a one-game suspension.

2. For the first time in football, the panel approved a guideline for instant replay officials to complete video reviews in less than two minutes, seeking to improve the pace of play in games. Additionally, if the game clock expires at the end of a half and replay determines that there was time remaining and the clock should start on the referee’s signal after review, there must be at least three seconds remaining, when the ball should have been declared dead, to restore time to the clock. If less than three seconds remain on the game clock, the half is over.

3. The panel approved a rule that restricts the number of teammates wearing the same jersey number to two. The rules regarding players using duplicate numbers continue to require that they play different positions and aren’t on the field at the same time. To respond to the popularity of single-digit numbers, players can wear “0” as a legal number.

4. The panel approved a rule that game officials’ jurisdiction of the contest begins 90 minutes before kickoff, instead of the current 60 minutes. Another part of the proposal calls for a coach to be on the field during pregame warmups when players are present, and all players are to be identified by number.