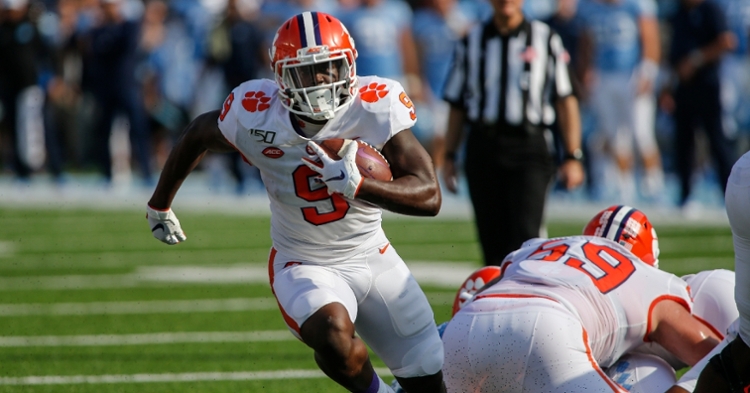 It's still very much win and in the CFP for the Tigers moving forward. (USA TODAY Sports-Neil Redmond)

However you rank Dabo Swinney's Tigers through five games, they are: 1) Undefeated still. 2) Well-positioned to make a fifth-straight College Football Playoff.

Have those odds dipped some in metrics after the 21-20 win at UNC? Yes.

After having firm top projections to make the CFP earlier this year, Clemson is now third behind Ohio State (71) and Alabama (68) with still solid 66 percent Playoff odds. With that shift, however, the Tigers' projection as a repeat national champion has dropped over 20 percent from preseason to now (37 to 16 percent according to ESPN's Playoff Predictor).

ESPN's Playoff eliminator has all of that group and also Florida, Iowa, Notre Dame, Oregon and Texas still in contention for a CFP bid.

With ESPN's Power Index, Clemson was actually given its third-highest game score of the season for the UNC win (79), behind Texas A&M (94) and Syracuse (88). It gives Swinney's group a 93.9 percent or better win chance in the next six games, with the South Carolina finale being the toughest game (relatively) to close out the regular-season slate (83.9).

Ohio State is now the most likely team to reach the playoff, according to the Allstate Playoff Predictor.

The Buckeyes also have moved into the No. 2 spot in FPI's rankings -- behind Alabama but ahead of Clemson. pic.twitter.com/jzpbKNIYjS

In the preseason the Allstate Playoff Predictor gave Clemson a 37% chance to win the national championship. Though the Tigers have not lost a game, that number has now dropped to 16%.