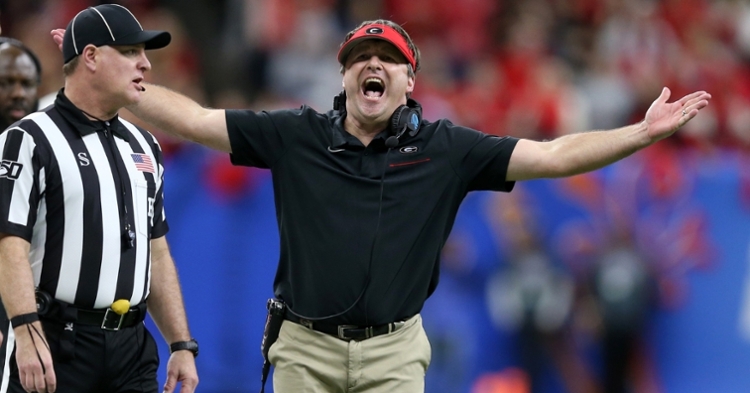 The Bulldogs sign top-five recruiting classes yearly, bringing in blue-chip after blue-chip to play in Athens. Despite that type of success, Georgia head coach Kirby Smart was complaining about negative recruiting in an interview Friday with SEC Network's Paul Finebaum.

"You probably would believe it, but you wouldn't believe what some coaches outside our conference tell kids," Smart said. "They'll sell to a kid that it's better to not go to the SEC because it's too tough."

Smart thinks coaches are telling recruits that you might get banged up bad playing in the rugged SEC.

"Well, that's not the way the NFL GM's are looking at it, and that's not the way the NFL coaches are looking at it," he said. "They want to take kids that want to compete at the highest level, that want to go play in those big-time match-ups, and that's what the kids want. They want to go play in the biggest games in the biggest places, and that's what they aspire to do.

"So, for a coach in maybe another conference to sell, 'Hey, it might be an easier path to come over here and go this way,' it just speaks volumes. You want kids to be able to see through that."

Currently, Georgia has the No. 7 recruiting class for 2021 and numero uno in whining about recruiting.

"Some coaches outside of our conference tell [recruits] that it's better to not go to the SEC because it's too tough, too competitive, and you might not have as good of a career there."

- Kirby Smart just now on our show ... which coaches/schools is he talking about? ??