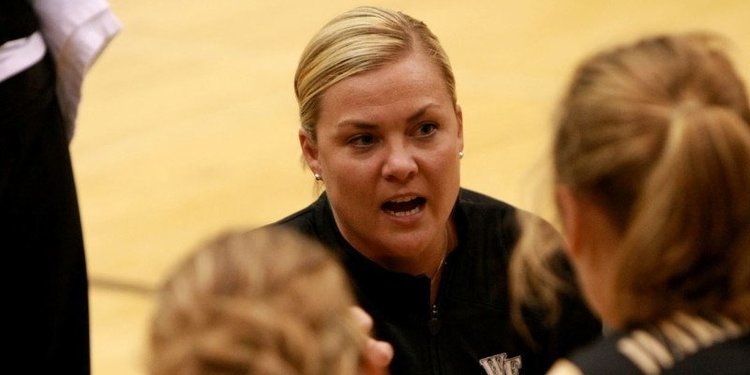 The Clemson Volleyball program mourns the passing of Heather Kahl Holmes, a former Clemson setter and assistant coach, who passed away Wednesday (May 29) morning.

A Celebration of Heather's Life will be held in Wait Chapel on the Wake Forest University campus on Tuesday, June 11. Further service details are pending.

In the summer of 2012, Heather was diagnosed with breast cancer and received treatment throughout that season while continuing to coach the team. In 2014, she received the Pete Moffitt Courage Award from Wake Forest athletics in recognition of her courageous fight against cancer.

Heather posted 108 wins in eight seasons as head coach of the Demon Deacons which is the most of any coach in Wake Forest volleyball history. Before being named the ninth head coach in school history in 2005, she served as an assistant for five seasons. In 2010, she guided the team to a 19-12 overall record and a program-best 11-9 mark in conference play. For her career, Holmes won 66 matches in the ACC.

Prior to her arrival at Wake Forest, Heather served as an assistant at Clemson. An assistant coach for five seasons, she helped lead the Tigers to the 1997 ACC Tournament championship, the 1999 ACC regular season championship and three NCAA Tournament appearances. She also coached one AVCA All-American in her tenure at Clemson.

Before beginning her coaching career, Heather was a standout player for the Tigers, leading them to their first two NCAA Tournament appearances and one ACC Tournament final as the team's starting setter from 1991-94. In 1994, she had an outstanding senior season and was named second team All-ACC and third team AVCA All-South Region. Heather also made the ACC All-Tournament Team and was named Clemson's team MVP. She also ranks fifth all-time in Clemson history in career assists with 3,722.

Selected to the ACC 50th Anniversary Volleyball Team on August 1, 2002, Heather was honored as one of the top 50 players in the history of ACC volleyball.

Heather is survived by her husband Michael, a former Wake Forest baseball standout, and their son Landon, 7.