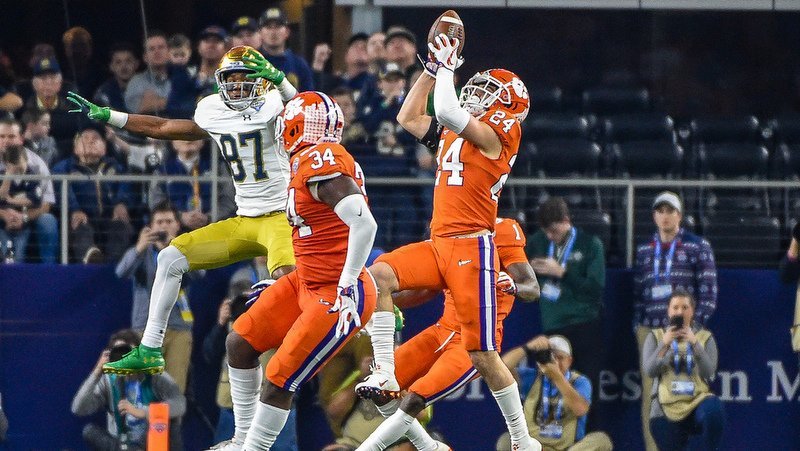 Clemson handled Notre Dame with ease in their last matchup in the CFP.

The ACC announced this week the one-year addition of traditional powerhouse Notre Dame to the football picture this year, which will likely be a preseason top-15 team.

Former Clemson coach Tommy Bowden was on a national sports talk show this week and he says the ACC is as good as any out there now.

“I think it’s as good as what any conference has put on the table,” former Clemson coach and current ACC Network analyst Tommy Bowden said on CBS Sports' After Hours with Amy Lawrence. “I think you will get a true champion from the ACC. The fact that you’re playing 10 games, they got one non-conference opponent, but the fact that they got the two open dates in there in case this pandemic mess creeps up on them. So there’s (15) teams, you’re playing 10 of them. The four lucky ones are the ones who don’t have to play Clemson.”

He also says the schedule being open to change was necessary during the COVID-19 pandemic.

“I think it gives you so much flexibility,” Bowden said. “But right now, this (pandemic) is something that nobody has answers to. The two open dates seems like a good idea, but again, we have no idea whether the pandemic is going to get better or going to get worse. If it gets worse, I don’t think we’ll be playing, and the two open dates will be irrelevant.”

Changes surrounding the pandemic had him to think back to some of the traditions at Clemson and what might change on a gameday with atmosphere.

"Probably one of the most unique experiences I have had with a team was for a team to go out of the locker room opposite the game field, get on a bus with a police escort and drive around the stadium and run down a hill," he said. "I'm sure they're going to eliminate that bus ride. Those are close-quarters right there. They're probably going to knock that out.

"Traditions like that and fans in the stands -- I would say coaches will know how to respond to that a lot better after their first week because it's never been done. There will be a huge learning curve after that first week."

Bowden says one of the tougher aspects of a season this fall would be staying accountable to players' parents.

"I think one of the biggest things is, when you recruit a young man and sit in his home and talk to his mom and his dad -- you tell the mother, 'Hey, I'm going to take care of him. I'll treat him just like my children. He's in good hands,'" Bowden said. "Now all of a sudden you have a pandemic or disease (that) right now we don't have a cure for. So there's a lot of sensitivity to the measures you're going to take to protect their son. And I think that would be more of a concern for me to sit there and look at the mother in the eye and say, 'Hey, I'll take care of him,' and then now there has been a little racial insensitivity that at least has been alluded to in college football and now you throw a little health insensitivity. You have to walk a fine line, no doubt about it."

He does trust the ACC to make the right call, however.

"The ACC, the years I spent there in 10 years as a head coach -- they really do a lot of research on anything they do," said Bowden. "So I'm sure this has been researched and medically think they have a way forward...I just don't think the decision would be made with all that's happened in the last few months in regards to the sensitivity to athletes' needs, whether racial or health-wise, I don't think they would jeopardize that."