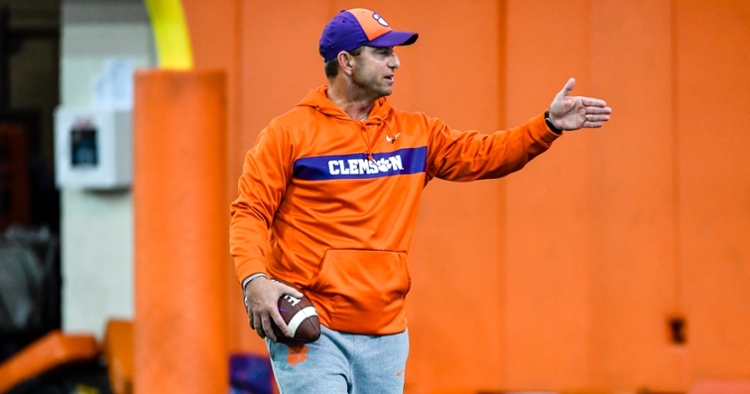 ESPN's 'The Last Dance' documentary series on NBA legend Michael Jordan and the Chicago Bulls' 1997-98 season has captivated the country with ratings that rivaled some of the last major live sporting events.

Clemson coach Dabo Swinney told The Roar's Out of Bounds program that he was locked in and ready for it.

"Did I watch it? Are you kidding me? I had my ankles taped, my eyeblack on -- I was dadgum ready," Swinney said. "It was mandatory watching in the Swinney household. I sent the whole team a message saying, 'Hey, we end all debate tonight. Make sure you're tuned in.' I can't wait - we had a team meeting on Thursday so I gave a big plug for it Sunday night so I can't wait for us to get back together as a group so I can get all their feedback."

Of course, "the debate" is over the NBA's greatest of all time, which has often centered lately on Jordan and LA's LeBron James. Swinney respects James' game but he's in Jordan's corner on the G.O.A.T. argument.

"Obviously, he (Jordan) was magical with his skills," Swinney said, "but it was the mental part of it. How hard he works when nobody was watching and his love of winning. He wasn't afraid to lead and challenge and as he grew into the aura of Michael Jordan and how he managed that. I always just had great respect for him. To me, he's been such an awesome competitor.

"And listen, LeBron is, to me, the same. This kid goes right out of high school into that world and LeBron James has really been a model guy his whole career. Just handled his business. He's a freak of an athlete. All those things, but I don't know -- just growing up in that era and the way the game was and how physical it was and the way the rules were, man, I would have to give him (Jordan) the nod, even to this day.

"Probably the freakiest athlete, certainly LeBron, but probably the overall best player -- I'd have to go with MJ, for sure."

Swinney's playing days on the college gridiron with Alabama overlapped with Jordan's rise to prominence and Swinney has taken quite a few lessons from Jordan over the years.

"I just think he set the tone for competition and being a competitor," Swinney said. "Might have been Roy Williams -- can't remember who said the line but I love that he said that (Jordan) was one of those guys who could turn it on or turn it off but he never turned it off. I love that. That right there is the ultimate competitor. I've been around guys who can turn it on and can turn it off and still be pretty good. But he never turned it off.

"Also one of the greatest quotes and I've used it many times with my teams over the years and my position groups over the years -- he was asked why he plays so hard on game 49 on the road or whatever and his response that it may be somebody's first time ever seeing me play. He just had a mindset...In today's world, that isn't always the case. He just to me was the ultimate competitor and I love the fact that he didn't compromise."

Swinney and Jordan met once when Swinney was on the coaching staff at Alabama. Check out that story below: