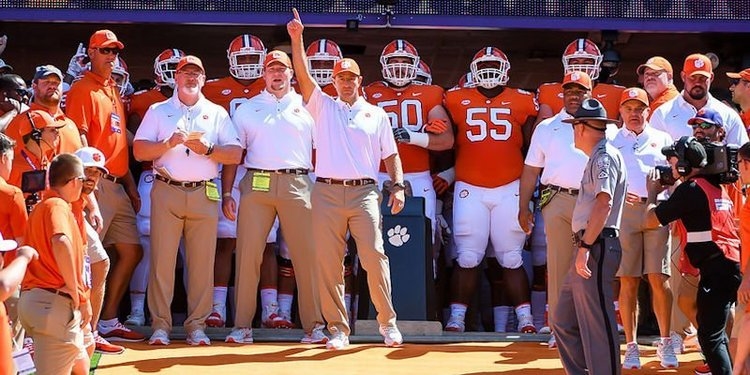 CLEMSON, S.C. – Clemson Athletics set a new school record with a 92 percent graduation success rate in the report released by the NCAA on Wednesday, in which data from the incoming classes of 2008-11 academic years were included. In addition to setting the overall athletic department record, which was bested by one percentage point after the program earned a 91 percent GSR score each of the previous three years, the Tiger football and men’s basketball programs also set new program records for their graduation rates.

“The emphasis that our entire athletic department has on graduating student-athletes is evident in these record-breaking Graduation Success Rate percentages,” Director of Athletics Dan Radakovich said. “It’s great to see the rates continue to show the results of the hard work of our student-athletes who have dedicated themselves in the classroom to achieve their degree.”

The GSR of 92 ranks in the top 20 percent among the 351 reporting public institutions. The overall score of 92 also ranks in a tie for 12th among all Power Five Conference schools, which puts Clemson in the top 18 percent of schools in that category. Ten of the Tigers’ 13 sports eclipsed the national average GSR for NCAA Football Bowl Subdivision schools, while an 11th program tied the national average.

(NOTE: When reporting GSR scores, the NCAA combines cross country, indoor and outdoor track and field. Also note that the Clemson women’s golf and softball programs will not have GSR scores until the four-class data becomes available for calculation.)

The Tiger men’s basketball program earned its first-ever perfect GSR score this year, improving 12 percentage points from last year’s report. Clemson football’s 87 percent graduation success rate is a new record for that program, which bested its previous high of 85 percent from one year ago.

- Set a new school record, after three-consecutive years at 91 percent

- Among the top 20 percent of 351 reporting institutions

- Among the top 18 percent of 65 Power Five Conference institutions

- The baseball program earned its second-consecutive score of 100, after receiving its first perfect score one year ago

- The football program also set a record with an 87 percent score, improving from a score of 85 percent last year

- The women’s tennis program has earned nine-straight perfect scores, and a total of 10, out of the 14 years the data has been released

- The volleyball program has achieved a perfect 100 GSR score 14 years in a row, every year since the data began being released in 1998