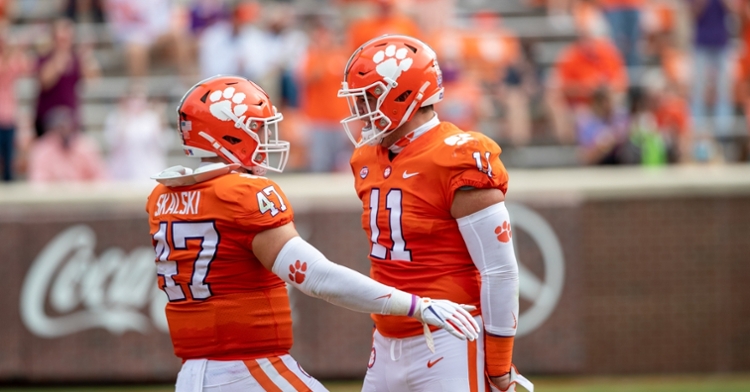 Bresee has been PFF's true freshman of the week each game he has played.

Both repeat winners from their season debuts, Lawrence was named national offensive MVP and Bresee took the nod for true freshman of the week.

"Producing three big-time throws on eight passes is ludicrous," PFF's Anthony Treash wrote. "I don't care who Clemson played — Lawrence made special throws on low volume that very few in college football could make. And for that, he wins our Offensive MVP of the Week for the second straight week."

"(Bresee) logged 21 snaps for the game in Clemson's blowout win over The Citadel and made numerous big plays that led him to a PFF grade above 90.0. Only five of those were pass rushes, yet he still came away with three pressures while also tacking on a couple of run stops. Bresee logged a snap at nearly every alignment on the line, from heads-up nose to 6/7-technique, and he ate up the Bulldogs offensive line. He's going to be a special player for Clemson."

Both were on the "PFF Team of the Week," as well as Tigers wide receiver Frank Ladson Jr.

"He saw very little action as a true freshman last year but caught a handful of nice jump balls with the help of his 6-foot-3 frame," Treash wrote on Ladson. "Ladson still had quite a bit to prove, though, and his Week 1 was well short of expectations, as he dropped one of three targets.

"He rebounded in a big way (Saturday) and showed exactly the type of weapon he can be for Lawrence once they face good ACC teams. Ladson caught three catches for 87 yards and two scores — one touchdown was the contested grab shown above in Lawrence's section, and the other was this nice sluggo-route that resulted in multiple steps of separation."