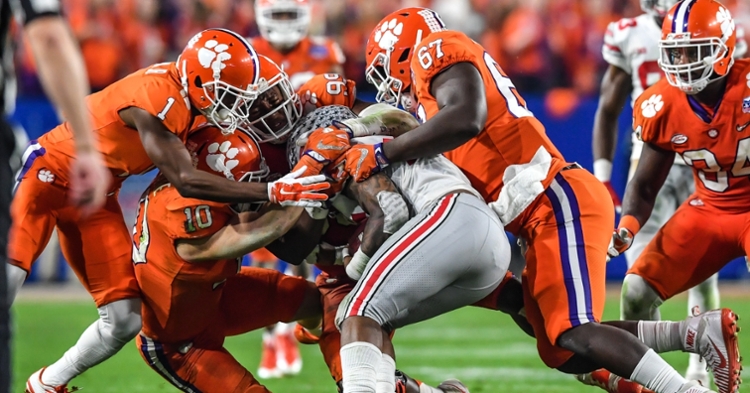 Clemson shut the Buckeyes out in 2016 and held on to down them in the 2019 Fiesta bowls.

Clemson has lost to Ohio State on the gridiron only in projections and predictions all-time, and that trend continued with ESPN's mock 64-team tournament for the 2020 season.

ESPN seeded the bracket by the Football Power Index, which has Clemson as the No. 1 overall for a third-straight preseason. Ohio State, Oklahoma and Alabama join them on the 1-seed line.

Clemson's path to a Final Four bid includes a matchup with former OC Billy Napier and Louisiana in round one, a 48-13 win, and then some unfinished business against TCU to avenge the 2009 loss, topping the Horned Frogs 38-21.

From there, Dabo Swinney's group downed 4-seed Michigan (38-24) and 2-seed Texas A&M (27-24) before a date with Ohio State in the national semis, which ESPN's Chris Low projects as follows:

"(1) Ohio State 35, (1) Clemson 24: The Buckeyes are still seething over the defensive touchdown that was overturned on replay in the 2019 College Football Playoff semifinals. They get another shot at the Tigers this season, again in the semifinals, and put the game away early."

He has the Buckeyes going on to beat a 3-seed Georgia, 35-31, for the national title.

The Tigers are 4-0 versus the Buckeyes in real life, including a pair of College Football Playoff wins -- the 29-23 Fiesta Bowl victory last December the latest.