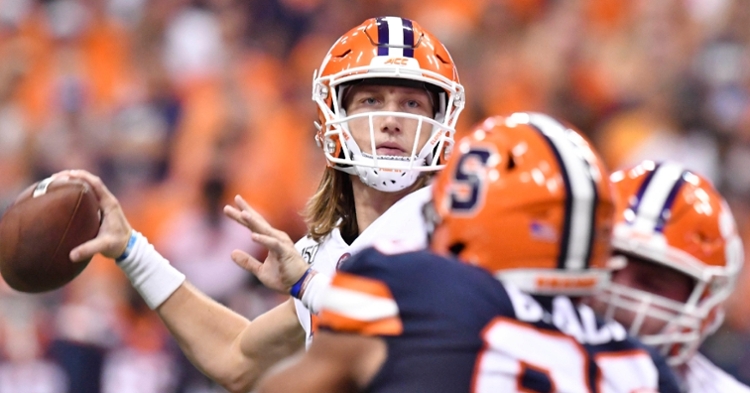 Trevor Lawrence passed for a career-high on Saturday but continued to struggle in taking care of the ball.

Clemson is a consensus No. 1 in the traditional polls, but that isn't the case everywhere.

CBS Sports' weekly 130-team ranking of the FBS moved Alabama slightly ahead of Clemson among their panel of voters.

"They (Alabama) have been the No. 1 team for some of our voters throughout the season and they’ve only taken care of business," said Chip Patterson on CBS Sports HQ, who added in the story that 2-0 Wisconsin also holds a first-place vote. "I think what we saw at South Carolina is the many different ways they can pick you apart. To do that on the road against that Will Muschamp defense, running it with Najee Harris - you’re going to shut down Jerry Jeudy and South Carolina did a great job of that -- boom, Henry Ruggs, boom, DeVonta Smith. I think that kind of diversity and the versatility probably caused them to be bumped up a little.

"Also, I wouldn’t be surprised if some of Trevor Lawrence’s performance -- the interceptions -- might have caused somebody who had Clemson No. 1 to slot them to No. 2."

Alabama won 47-23 at South Carolina, while Clemson also went on the road to top Syracuse Saturday, 41-6.

LSU, at No. 3, then Ohio State and Georgia complete the top-5. The top-ranked Clemson opponent is Texas A&M (19) and Virginia is the next-best from the ACC (21). NC State saw one of the biggest drops after its disappointing loss at West Virginia, falling 31 spots to No. 57.

The CBS ranking joins some metrics in ranking Alabama No. 1, such as the ESPN SP+ and Football Power Index, which has Clemson down at No. 3 behind both Alabama and Georgia now.