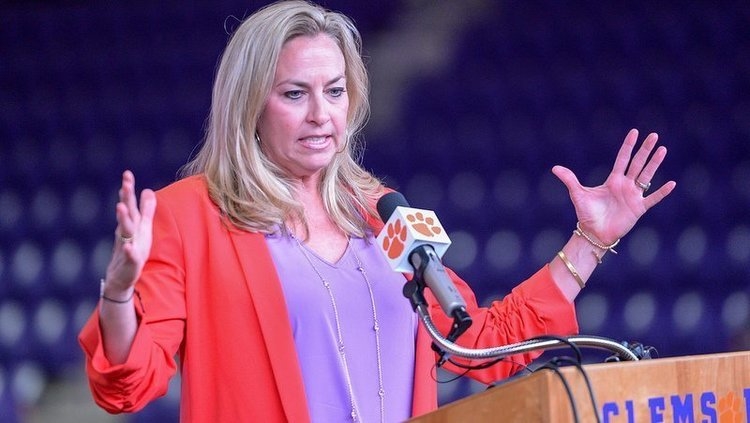 ATLANTA - Clemson women’s basketball head coach Amanda Butler has been named a late season candidate for the 2019 Werner Ladder Citizen Naismith Women’s College Coach of the Year award, as announced by the Atlanta Tipoff Club. Butler joins 14 other candidates up for the national award and is one of five Atlantic Coast Conference coaches on the list.

Clemson’s turnaround in Butler’s first year at the helm has been nothing short of remarkable. The Tigers are sitting at 18-10 (9-6, ACC) on the season and are eying their first postseason appearance since 2004 (WNIT) or 2002 (NCAA).

Bringing in just two players of her own, Butler quickly identified a gritty style of play that would highlight the talent and skill sets of the players on the current roster. Playing an up-tempo style of basketball, the Tigers are averaging almost 20 points more than they did a season ago (50.5 to 69.1). With an emphasis on aggressive defense, Clemson ranks fourth in the nation, (first in ACC) in total steals (328).

Butler has coached the Tigers to nine ACC wins so far, eight victories over last year’s mark. That is the largest turnaround in wins by a first-year head coach in ACC history. Only two ACC coaches have manufactured better turnarounds in their careers: Katie Meier, 2011 Miami (tied, eight wins) and Kay Yow, 1989 NC State (nine wins).

A team that was picked to finish last in the ACC by the Blue Ribbon Panel, Clemson currently sits in seventh place in the conference standings. Should the Tigers hold their position, they will tie the 2014-15 Pittsburgh Panthers for highest finish above the preseason prediction.

The Atlanta Tipoff Club will announce a list of 10 semifinalists for the award on Monday, March 4.