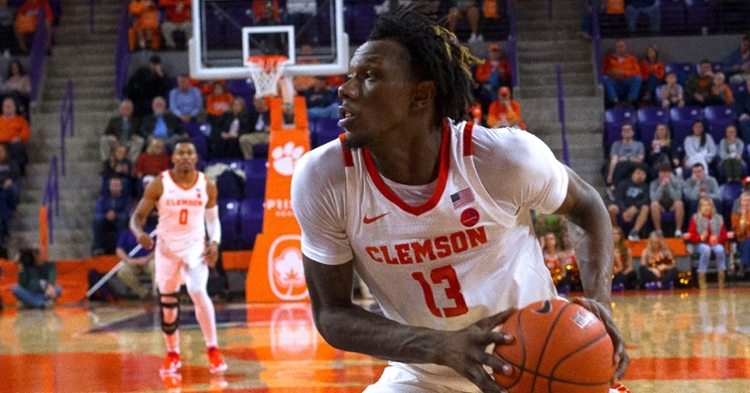 Clemson is back in the postseason basketball radar after two big wins. (Photo: Josh Kelly / USATODAY)

Clemson men's basketball is back in the running for a postseason bid thanks to a pair of big wins last week.

In the NCAA's NET ranking, Brad Brownell's group has moved up 21 spots since last Wednesday's 72-52 win over Pittsburgh, up to No. 80.

The win over No. 5 Louisville on Saturday gave Clemson its second victory over a top-10 NET team (Duke, 6; Louisville, 9) and they are 7-10 versus Quadrant 1 and 2 teams*. In the old ranking system, Clemson has an RPI of 95 per WarrenNolan.com. The Tigers are 13-12 on the season now before heading to Boston College on Saturday (6 p.m./ACC Network). They stay on the road at Georgia Tech on Tuesday, Feb. 25, and then finish with two of their final three regular-season games at home (FSU on 2/29; at Virginia Tech on 3/4; GT on 3/6).

Clemson was pegged as a 5-seed currently in an SB Nation NIT projection on Tuesday.

The NET ranking was not necessarily indicative of bubble status in its debut last year. Clemson ranked No. 35 in the final standings but was not in the last four teams out for the NCAA Selection Committee (Alabama, Indiana, TCU and UNC Greenboro).