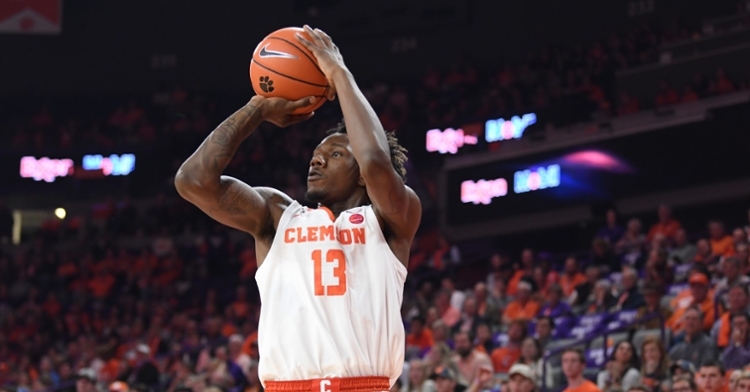 Clemson rallied from down as much as 15 points to force overtime and topped TCU 62-20 in game two of the MGM Main Event on Sunday in Las Vegas.

While Clemson struggled on the offensive end to start the second half, TCU went on a 14-3 run to take a double-digit lead in the early-going, but a furious 15-0 rally -- anchored by Clemson leading-scorer Tevin Mack -- quickly shaved the Horned Frogs’ edge down until the game was tied up with 25 seconds left thanks to a Mack jumper. The Tigers had a shot at the win in regulation but an Aamir Simms layup attempt was blocked by TCU’s Kevin Samuel at the buzzer.

In overtime, the two sides traded blows for tight action into the final minutes but freshman Al-Amir Dawes hit a 3-pointer to put Clemson up 61-60 with a minute and a half left. Simms had a chance to extend the lead at the free throw line with just under a minute left and missed both attempts. Then Dawes would get his chance after a TCU turnover and miss two as well, but after a timeout, TCU’s Edric Dennis shot attempt off the glass rimmed out and another layup try was off the mark as well with a second left to seal the Clemson win.

Clemson stretched its winning streak to five games after the opener loss to Virginia Tech, giving TCU its first loss of the season (4-1). The Tigers will round out play in Vegas versus Colorado (4-0) at 11:30 p.m. ET on ESPN2 Tuesday.

Both sides started cold from beyond the perimeter, missing 12 of the first 16 tries, but Clemson’s Mack started a personal 8-0 run with a trey past the midway point of the first half. TCU answered with its own 8-0 run and the teams were all square at halftime after a buzzer-beater layup from Desmond Bane.

Mack scored 13 of Clemson’s 23 first-half points on 5-of-7 shooting. The rest of the Tigers were 3-of-17 from the field shooting.

Mack, a Columbia native and graduate transfer out of Alabama, finished with a game-high 22 points and has scored in double-figures each game this season.

Simms would score 11 of his 13 points in the second half to post a double-double with 12 rebounds.

Dennis led TCU with 18 points on 6-of-14 shooting. The Horned Frogs were held scoreless over the final 7:39 of regulation.

After closing out regulation on a 13-0 run and TCU not scoring for the last 7:19 of the game to force OT.

Clemson (+115) misses four straight free throws to close the game out but put the clamps down on D to win it in OT. pic.twitter.com/jPcDEkMHs5

Clemson trailed TCU 52-37 with 7:30 left before winning in overtime 62-60. It marked the largest deficit with less than 8 minutes remaining overcome to gain victory in Clemson history. Previous record was 13 point deficit (60-47) with 7:57 left at Maryland on March 2, 2008.

Clemson-TCU box
ONE DAY ONLY! Fanatics.com Black Friday Sale 20% off on orders over $75
Comment on this story