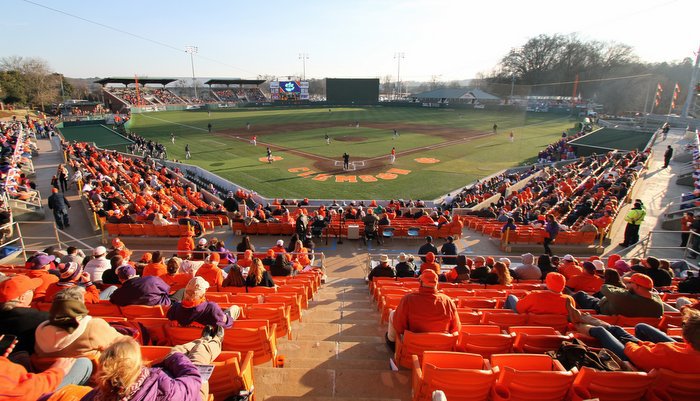 I have mentioned many times on my radio show and on this blog that I love Clemson baseball. However, it was pretty clear if you paid attention that I had lost enthusiasm in the program the past couple of seasons.

Personally, Clemson baseball the last few seasons felt like the movie Groundhog Day. It seems like it had turned into the same ole, same ole.

When Clemson was winning ACC titles and going to the College World Series, it was fun to go to the ballpark. I rarely missed a home game. When the program slipped, the fun went with it. I got tired of losing and became frustrated with the lack of titles.

I became a bad fan because I got irritated with small aspects of the program. When we were winning, it didn't bother me when Jack Leggett jumped into the huddle after exchanging lineup cards. When the program slipped, I hated it.

Winning meant I didn't notice Leggett tipping his cap to the third base admirers. Losing caused me to despise that individual attention.

I was irrational in my analysis. When we would lose 2-1, I complained about the offense and the evaluation of the position players. After an 8-7 loss I blamed the program's pitching evaluations and thought we would could never win again with these arms.

I became totally irrational. The promotions got old to me. Candy toss began to get stale. I cringed when I heard the song, "She Thinks My Tractors Sexy." I was not having fun and was letting little things aggravate me. Frustration was at every turn. I was upset with concession prices. It was too cold in February and too hot in May. When we made an error, I would think out loud, "Here we go again." I acted like a runner picked off of first base was something that happened every inning. If a batter took a third strike, I would sigh loud enough for people around me to hear. Simply stated, I wasn't fun to be around. I am surprised my friends didn't ask me to leave because I probably dragged them down too.

This is the residual of nine straight years without winning 50 games. Clemson has won one ACC title in 21 years. In the last eight years the Tigers were just 23 games over .500 in ACC play. Clemson hasn't been to the CWS in five years and has only one trip in the last nine years. The Tigers have won just two of the past ten NCAA tournament games.

The last nine years were not up to my standards of Clemson baseball and it affected my attitude about the program. Fair or unfair, I just felt different walking into the stadium.

Friday the Monte Lee Era begins and I couldn't be more excited. My guess is this team will score runs, but pitching will be an issue. I don't have high expectations for this team, but I am excited to go to the ballpark again. This weekend the music won't grate my nerves. The concession prices won't grind my gears. I am going into this year with a new attitude.

Eventually Lee will have to win here, but that is not the main theme this weekend or this year. The immediate future is more about the newness of the program. I am taking a clean slate into the games this weekend. I am looking forward to enjoying the games again, having fun again.