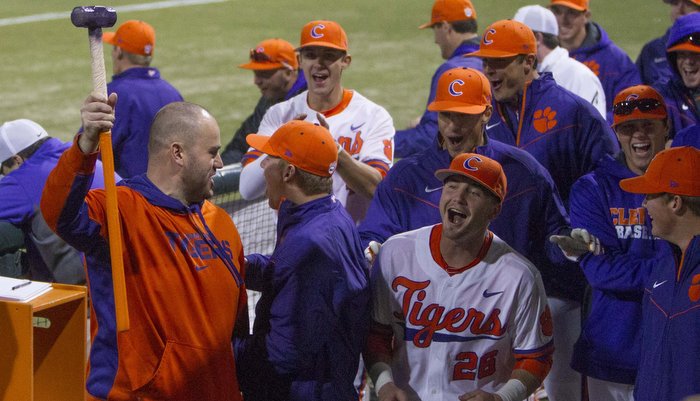 The outlook for Clemson baseball in the 2016 season just took a turn in the right direction.

Clemson headed into the rubber game of the last two weekend series desperately needing a win. The season had taken a turn for the worse. The Tigers lost two of three at Duke, got sweep by Louisville and lost the final two games at home to Georgia Tech.

The Tigers split the first two games with Florida State, but the Noles put up 11 runs on Clemson in game two of the series.

In the NC State series, Clemson had also split, but the Wolfpack pounded the Tigers for 20 runs in the first four innings in game two.

Yes, Clemson was reeling with a starting rotation that had few answers. In fact, just look at the middle game of each series the last few weeks. Clemson gave up 20 against NC State, 11 against FSU, 16 against Georgia Tech and seven against Louisville. A few weeks earlier the Tigers gave up 15 in the second game of the Pittsburgh series. Clemson was 1-6 in the middle game of last seven ACC series.

On Monday, he tossed 7.0 innings in relief against No. 5 Florida State, allowing just three hits, no runs, and one walk with eight strikeouts in Clemson's 7-3 win.

In the first three years in college, Krall had never started a game. Monte Lee and his staff decided it was time to give Krall his first career start on Sunday, and he responded. He gave up just five hits, one run and three walks with five strikeouts in 9.0 innings pitched to earn the win in the Tigers' 2-1 walk-off victory over No. 9 NC State.

On Saturday Clemson gave up 20 runs in the first four innings. On Sunday, Krall gave up one. That is how you change a series.

With this kind of effectiveness at the top of the rotation, the Tigers should be beaming with confidence. This is a game-changer. There was a huge void in this team, and Krall's emergence gives the Tigers a renewed enthusiasm entering the final two weeks of the regular season.