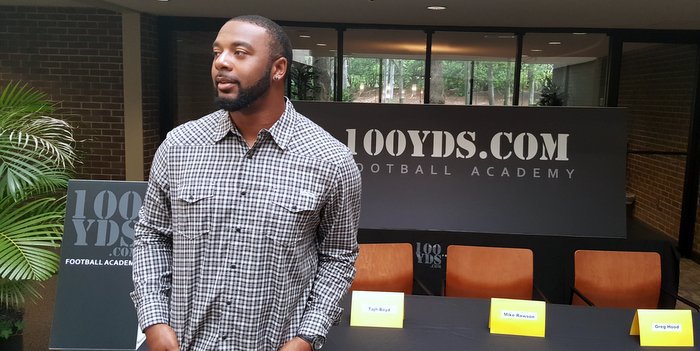 Boyd is always wanting to give back to the community

Tajh Boyd has been through it all, and he decided he needed to share his thoughts with younger players.

The former Clemson quarterback took to Twitter Thursday and sent out 16 life lessons that recruits and young college players can live by. Boyd, who always wants to give back to the community that he feels gave him so much, loves to help others.

It all started with a tweet from a young South Carolina baseball commit named John Gilreath out of Rock Hill (SC) Northwestern.

“There was a South Carolina baseball commit who hit me up on Twitter,” Boyd told TigerNet. “He told me he was headed to South Carolina to play baseball, and he asked if there was any advice I could give him. That got me to thinking.”

Boyd walked into the dining hall at Clemson Thursday, saw a bevy of young, high-profile players and the plan began to take shape.

“I stopped by Clemson yesterday, and I was talking to Cornell Powell and looking at some of the guys that were eating in the dining hall, and I could remember the day I walked on campus,” Boyd said. “I was sitting there thinking that this is such a new experience for them. It's exciting, it's frightening, and you don't know what to expect and what's going to happen. I was actually going to write a little bit more, but I thought 16 was enough. I had 25 or 30 written down.”

Boyd said he hopes his wisdom can make the de-recruiting process a little easier for players who are used to having everything handed to them.

“Coming out of high school, some of these guys are Army All-Americans, and there are 5-star recruits everywhere, and the number one player in the country and they have all these expectations,” Boyd said. “I just wanted to give them some insight into what's really about to happen. Because at the end of the day, you have to take advantage of every opportunity that is handed to you. At Clemson, the recruiting classes are getting bigger and better every year. There is going to be a lot of competition, and there is going to be a lot of hostility and a lot of egos. Just taking things from players that I knew that were recruited were 5-stars that never turned out to be what they were supposed to be, and then the 2-star players that exceeded expectations. At the end of the day, it's going to be what you make it.”

Boyd said the main thing that young athletes should take from the tweets is that hard work pays off.

“You have to have the mentality that you have to work to be the best you can be. If you think that nobody is going to give you anything and that you have to earn it, then you will be that much better prepared, and you can take your talents to places that you didn't even know you could go,” he said. “You look at guys like Mackensie Alexander, Deshaun Watson, and Sammy Watkins; they were high-profile guys but they worked like Clemson was their only offer. They had something to prove. That is what separates guys. That moment that you feel entitled, you lose. When you think you want to transfer because it's harder than you thought it would be, you have no idea how close you are to a breakthrough. The coaches will kiss your butt through four years of high school, but in college, you're own your own, and it gets worse in the NFL.”

Boyd, who was released earlier this month from the CFL, said he hasn’t given up on football but is weighing his options.

“Right now, there’s a lot of things I can do,” he said. “But I am just going to take my time and make sure I get the right fit for me.”

1. It's not Easy.
2. Be coachable, come in willing to learn in the classroom and on the field.

https://t.co/fb5is07UpU the process, Just because a player starts off in a better spot doesn't mean you won't pass them, it's a journey.

4. Your stars mean nothing. Don't feel entitled to anything.
5. Everybody works hard, you gotta separate yourself from them (extra work)

6. Earn playing time, don't ask for it
7. Don't be a kiss ass, nobody likes a kiss ass not even the coaches!

8. They said you were their favorite recruit, but so is everyone else
9. The classroom directly correlates to the playing field

10. Don't spend your pell grant on hats, you'll lose more than you keep.
11. Your image is everything, create the brand you want

12. You don't have to fit in, be who you are people know what's genuine and what's not
13. Enjoy the experience, create life long friends.

14. Leave it all out there on the playing field, you have nothing to lose and everything to gain!
15. Your academic advisors matter be nice

Last one.. KNOW that you belong! Be great and Go Eat!