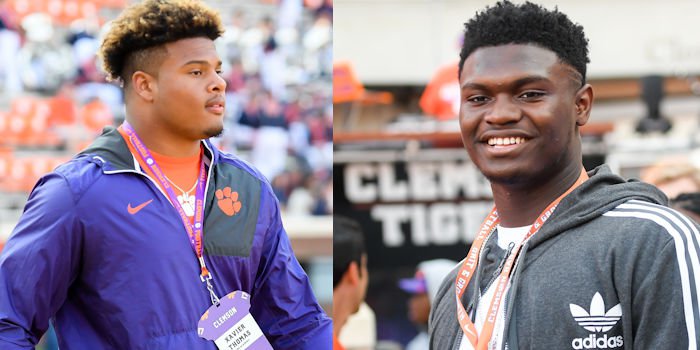 Thomas is the 5-star defensive end out of Bradenton (FL) IMG Academy who committed to Clemson last April, and he’s been doing his part in trying to draw in the nation’s top recruits. Most of those have been in football, however, but Saturday he reached out into the world of basketball.

Williamson is a 5-star forward out of Spartanburg (SC) Spartanburg Day School who is rated as the No.2 overall prospect for 2018 by ESPN and Scout. The 6-7, 230-pounder has become a social media sensation because of his freakish athletic ability and highlight reel dunks. Duke and Kentucky have long been considered his favorites, but Clemson has been kept in the running due to the efforts of assistant coach Steve Smith and head coach Brad Brownell.

Williamson was on hand for the Tigers’ 14-6 win over Auburn Saturday – he made the trip with his parents – and Thomas said he let Williamson know that history could be made if Williamson joined Thomas and fellow No. 1 player in quarterback commit Trevor Lawrence.

“It was nice. I was talking to him about coming to Clemson,” Thomas told TigerNet Sunday. “He was telling me how Clemson was one of his top schools and how he was really liking it there. I was telling him to take it all in, and he was telling me how he wanted to take his official with his parents, which is also what I am doing. I think that is good for him and it's good for Clemson. I told him that we could make history. With the number one player in basketball and the top two players for 2018 in football, I said we could make history by doing that. I was telling him we could do that.”

Thomas didn’t limit his conversations to Williamson, however, and he says he’s still working on the top recruits in football.

“The ones I talk to the most are Nolan Smith, K.J. Henry, Patrick Surtain and Justyn Ross,” Thomas said of his efforts. “Those are the ones I am really focusing on right now with this 2018 class.”

Thomas said the night couldn’t have been scripted any better – he spent time with the other recruits and then watched as Clemson’s defense held the Auburn offense in check.

“It was special. Death Valley is a special place and those fans are really special,” he said. “There was a lot of energy in that stadium and they made an impact on the game. They had 11 sacks and the defense played great, and Auburn had just 38 rushing yards on 42 carries. Coach (Brent) Venables always comes up with a great scheme to stop the offense. That was pretty special.”

Thomas and the rest of the recruits were treated to a special opportunity – they were taken to the top of the hill and watched the Tigers’ celebrated stadium entrance up close and personal.