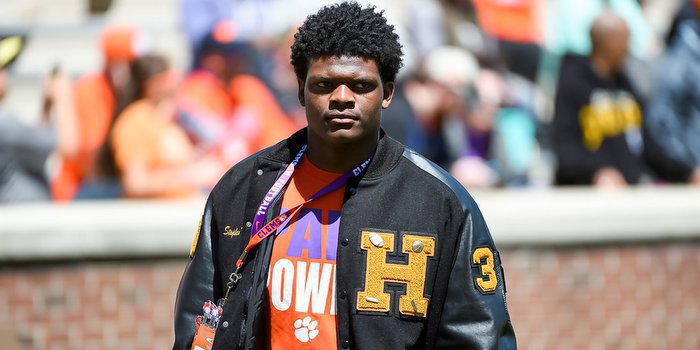 Offer number 26 rolled in for Clemson legacy Stephon Wynn earlier this week, and it came from the program that National Champion Clemson defeated in the title game in Tampa last month.

The Alabama Crimson Tide extended an offer to the 4-star defensive end out of Bradenton (FL) IMG Academy. The 6-5, 250-pounder is from Anderson and began his high school career at T.L. Hanna before moving to IMG in mid-January. His father, Stephon Wynn, Sr., played tight end at Clemson from 1990-94.

Wynn also has offers from LSU, Florida, Georgia, Michigan, Nebraska, Tennessee, Ole Miss and Miss St. among others, but he says the latest offer shows people are taking notice.

Wynn visited Clemson last weekend for the Tigers’ Elite Junior Day, and he was accompanied by four of his IMG teammates, a group that included linebacker commit Mike Jones, Jr., and fellow South Carolinian Xavier Thomas.

The group got to see Clemson’s new football complex up close, and he said it was great to see the new building with his teammates.

“It's amazing. Nobody else in the country has what they have. It is incredible,” Wynn said. “The slide was fun. That is what probably stood out the most. It is real fast. It was great to experience that with those guys. It was a cool experience.”

He also got a chance to meet with new defensive line coach Todd Bates, who was hired after longtime defensive ends coach Marion Hobby left for the NFL and defensive tackles coach Dan Brooks retired.

“I got to meet Coach Bates. He is really cool,” Wynn said. “I was a little shocked to hear about Coach Hobby and Coach Brooks. Those guys have been at Clemson a long time, so it was good for me to get to know him.”

Wynn said he’s in no hurry to make a decision or name a leader. Instead, he just wants to enjoy the recruiting process.

“We are going on some visits soon, and I want to see other places and see what they have to offer. We are down here now and it's not as easy to get around but we are going to make some visits,” he said. “I don’t have any of that planned out (making a decision) yet. I want to take all the visits and I still have more offers coming in, so I am not ready to pick a top group or make any kind of decision.”

He also recently announced that he has accepted an invitation to play in the Under Armour All-American Game.

“I got invited to the game about a month ago, and I've been thinking about it,” he said. “But it's a no-brainer to go and play if you get selected to something like that, so I am going to play.”

Blessed to announce that I will play in the 2018 Under Armor All-American Game!! #PuBd pic.twitter.com/kT8gPhuQDa