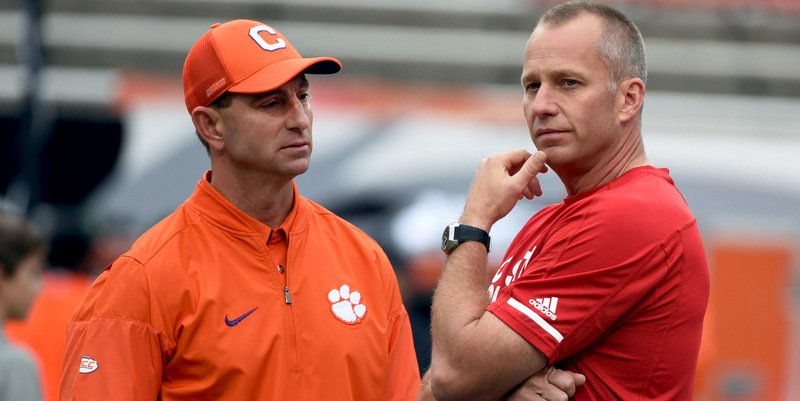 RALEIGH, NC – If I’ve heard Dabo Swinney say it once, I’ve heard it more than 50 times during his coaching career. Win with class, lose with class.

Following Clemson’s shocking loss at Syracuse last month, Swinney walked into the postgame interview area and opened up his press conference with praise for Syracuse.

"We're very disappointed, there's a lot of pain in our locker room," Swinney said after Syracuse's 27-24 win over Clemson. "But, listen, this is a story about Syracuse. This ain't about Clemson. This is about Syracuse. They out-played us, out-coached us."

As it turned out, Swinney addressed his own team after the loss and then went into the Syracuse locker room to congratulate the Orange players.

"He came in and congratulated us, just saying, 'Great win,' and that was probably one of the most class-act things I've ever seen," Syracuse linebacker Zaire Franklin said. "As an opposing coach, so heralded with so much of a reputation, to be knocked down like that and have the humility to come congratulate us, that says a lot about who he is. I thought that was awesome."

"When I got back, players were telling me that [Swinney] came in, and that does not surprise me," Babers told SportsCenter. "He's a first-class act. I guarantee you if someone said, 'Hey, Dabo wants to talk to the team; what do you want us to do?' I'd say, 'If Dabo Swinney wants to talk to my football team, you let him talk.' That's how much respect I have for that man. [My players] were really excited and proud that he came in and delivered that speech based off the effort of how they played on the football field."

Doeren didn’t give a nod to Clemson’s effort during his postgame press conference, instead spending much of it complaining about a laptop on the Clemson sideline, the officiating or saying how much injuries played a part in the loss (even though Clemson’s secondary was wiped out, but hey). Go listen to his entire press conference - not once does he congratulate Dabo or the Tigers.

Doeren started by complaining about the officiating and then moved on to the mysterious laptop.

“I wish it was a lot better, Joe. I’d like to know why there was a laptop on Clemson’s sideline that people were looking at, too. I’d like that to be investigated,” Doeren said. “Maybe they weren’t doing anything, but I was told it’s illegal to have technology on the sideline. So I’d like to know that as well. No idea [who it was], I just saw a picture of it walking up here."

He then blamed injuries.

“It doesn’t help, when some of your best players aren’t 100%,” he said. “Justin Jones tried to play, too, and he couldn’t make the full game. Proud of those kids for trying. They really wanted to be out there. It hurts, you know? That’s why you recruit. You find a great player, and you need them in a big game like that.”

Many Clemson fans didn’t like it when Swinney visited the Syracuse locker room, and there were complaints aplenty. But that’s just Dabo being Dabo. He has said on more than one occasion that at the end of the day, it’s just a game. He knows as well as anybody that people are facing life-and-death situations every day, and football is needed to be an escape from the trials and tribulations of life.

Dave Doeren doesn’t get it, apparently, and he could learn a thing or two from Dabo Swinney.