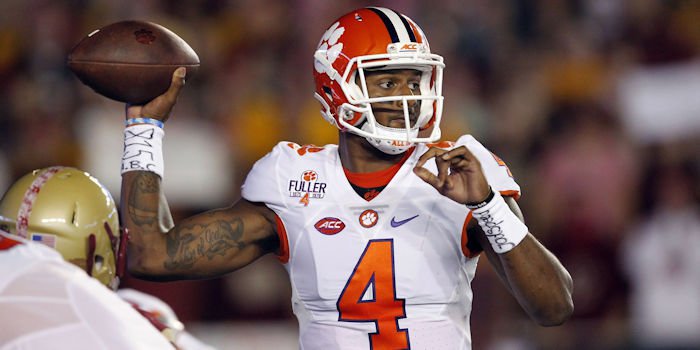 Third-ranked Clemson finished a yard shy of 500 total yards in Friday night’s 56-10 win at Boston College, but the victory marked the fourth straight week the offense has shown flashes of the offense fans saw at the end of last season.

The Tigers ran up 555 total yards against South Carolina St., 442 on Georgia Tech, 507 against Louisville and 499 against a Boston College defense that was ranked first nationally heading into the game.

Watson finished the night 14-of-24 for 266 yards and four touchdowns, and he said he thinks the Clemson offense is right where it needs to be and he’s where he needs to be halfway through the season.

“Yeah, I think I’m where I want to be. A lot of mistakes, a lot of - not so much mistakes but learned lessons throughout my first five games, and I wanted to come in here and be as smooth and as very productive as I can, help this offense, and not do the same mistakes that I did the previous week and just improve,” Watson said after the game. “I think it’s not just me individually but the whole offense has been improving each and every week, and we’re getting better, building more confidence, playing as one unit and we have so many athletes and so man playmakers that we’re all just not being selfish. We’re all cheering one another on and whoever’s time it is and the opportunity that comes, they take advantage of it.”

Running back Wayne Gallman finished with 109 yards on nine carries, and he said head coach Dabo Swinney has encouraged the team to finish with a flourish.

“One thing from the past few weeks is we haven’t played as well in the first half, so he really challenged us to come out and really finish the game,” Gallman said. “He wanted us to make this the second half that we’ve played all season.”

Watson said the Tigers were getting back to paying attention to every part of the game.

“It’s just the things, just opening up the run game, opening up the passes here and there,” he said. “It’s always passes like that that kind of connects, not just for me to get my rhythm in, but also the whole offense. But once we connect on those passes and do the little things right, the big things open up. Once we start clicking, it’s hard to stop us.”

Watson said the offense is a step ahead of where it was at the same time last season.

“There are a lot of new pieces on the offense and a lot more skill guys and a lot more impact guys that can make plays so we're just trying to find what we're good at and find that rhythm and what the opponent wants to do against us. We have to find the good plays,” he said.

Clemson will take off Saturday and Sunday and start preparations for NC State on Monday, and Watson echoed Swinney’s mantra that the game against the Pack will be the biggest of the season.

“Because we have the one-game mentality and one-week season. Each week we try to be 1-0. We don’t look forward to the next game or the game past,” Watson said. “After that one day, after we play, we turn our focus on to whoever we have next. Now we’re going to celebrate this win and tomorrow is about the 0-0 and trying to be 1-0 next week. We’re going to put all of our focus and all of our time and energy into that one game and then move on. That’s just the coach that’s been here and has said that from day one. Even before I committed, ever since Coach Swinney has been here, he’s had that one-week mentality. It’s just built in from the coaching and everyone understands it.”