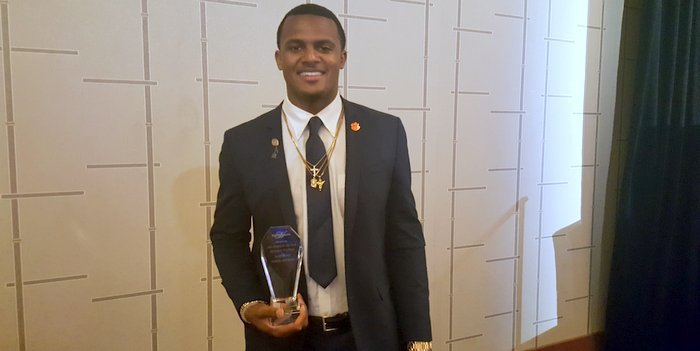 Clemson's coaches and Vic Beasley were on hand to support Watson

The South Carolina Football Hall of Fame presented Watson with the 2015 Collegiate Player of the Year Award at its annual banquet at the Hyatt Regency, completing the trifecta for Clemson players of the last three years. Vic Beasley won last year’s award and Tajh Boyd won in 2013.

Giving the banquet a certain flavor – Clemson greats Michael Dean Perry and Jeff Davis are a part of this year’s Hall of Fame Class and Davis quipped that, “Clemson is used to dominating.”

Watson then took less than two minutes to give his acceptance speech.

“Thank you to my family for their support, for raising me the right way and for always being there,” Watson said. “They've always tried to push me to achieve my goals. Thank you to the Clemson coaching staff - Coach Streeter and Coach Scott and all of the other coaches. They are always pushing me to be better on and off the field. They want me to be a great player but they also want me to be a great citizen and set a good example for the kids. This award shows that your dreams and anything you want to achieve are right there for you if you put your mind to it. Thank you all for coming out and thank you for this award. It’s an honor to be the South Carolina player of the year. Thank you and go Tigers.”

Swinney introduced quarterbacks coach Brandon Streeter, saying that he called Streeter over a year ago with the opportunity of a lifetime. 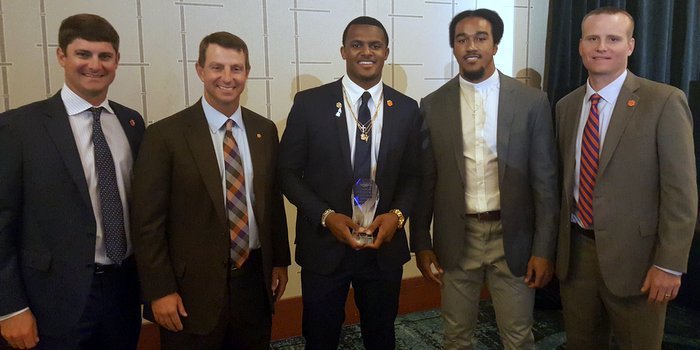 Clemson's coaches and Vic Beasley were on hand to support Watson"

“I called him up, and I said, ‘Brandon, I’m about to make your life. You get to coach Deshaun Watson,’” Swinney said.

Streeter said he was proud of what Watson has accomplished.

“I am proud to be his coach. It was an honor a year ago for Coach Swinney to call and offer me this position. I couldn't have asked for a better situation,” Streeter said. “I am impressed not only with his talent but more importantly how he represents Clemson University.”

Watson told TigerNet all the credit should go to his teammates.

“I’m really just enjoying it. I just embrace the moment and have to give credit where credit is due and that’s to my teammates that were with me,” Watson said. “They helped me get this award. I’m just trying to take it all in and enjoy all of the experience and the travel.”

Watson said he was pleased to represent the Tigers with Davis and Perry.

The award is given to the top player who either hails from the state of South Carolina or plays football in the state. Watson completed 333-of-491 passes for 4,104 yards and 35 touchdowns and also had 207 rushes for 1,105 yards and 12 scores this past season. He became the first player in NCAA FBS history to throw for 4,000 yards and rush for 1,000 yards in the same season.

Watson, a sophomore out of Gainesville, Ga., led the Tigers to a 14-1 record, an ACC Atlantic Division and the ACC Championship. He quarterbacked Clemson to a dominating win over Oklahoma in the Orange Bowl and the College Football Playoff Semifinal, and was outstanding against Alabama in the College Football Playoff National Championship against Alabama.

The Crimson Tide defeated Clemson 45-40 in January to win the title. Watson, who finished third in the Heisman Trophy voting, had 478 total yards against Alabama. Watson had 20 carries for 73 yards and was 30-of-47 for 405 yards and four touchdowns through the air.

The Clemson signal caller was also named the consensus first-team All-American quarterback, another first for a Clemson player. He was the Most Valuable Player of the ACC, the MVP of the ACC Championship game and of the Orange Bowl victory over Oklahoma.