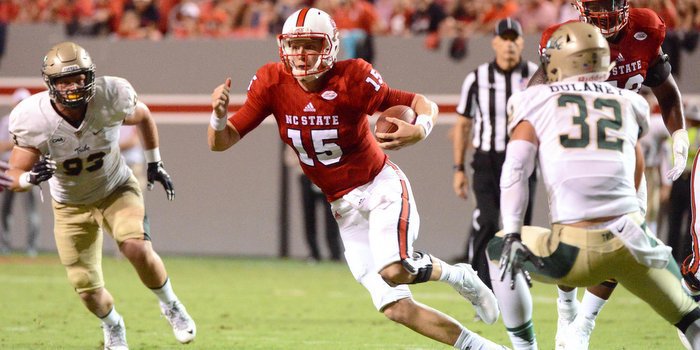 In his first season with the N.C. State football team, quarterback Ryan Finley hasn’t been perfect.

But he has been close.

Most importantly, Finley hasn’t thrown an interception while he has thrown nine touchdown passes, and the Wolfpack have allowed just five sacks.

Applying some pressure is the focus for the Clemson defense for Saturday’s game at Death Valley.

The Clemson defense has gotten plenty of pressure on its opponents this season while forcing many mistakes.

The Tigers have nine interceptions, which is tied for eighth in the nation, with 21 sacks (tied for sixth) and 56 tackles for loss (tied for third).

“That was big for us,” Watkins said. “Lamar Jackson, he’s a great player. (The Boston College) quarterback wasn’t quite like him, so it kind of made it easier for us. It felt good. Guys really showed what kind of defense we are and offense, as well.

“Coach V pushes us every week. We want to get better every week. That’s our mentality, so hopefully, it stays that way.”

The Tigers will need to keep that mentality going this week against the Wolfpack, who have won three straight games since losing to East Carolina. Matthew Dayes leads the rushing attack with 563 yards and three touchdowns while averaging 5.7 yards per carry.

“N.C. State has always been a good team,” Watkins said. “Last year, we struggled with them a lot. Defense, we gave up a good bit of points, so we don’t take anybody lightly. But they’re a very tough team, a great quarterback, good running back, as well, couple of threats at wideout. So I really think they’re a pretty good team this year.”