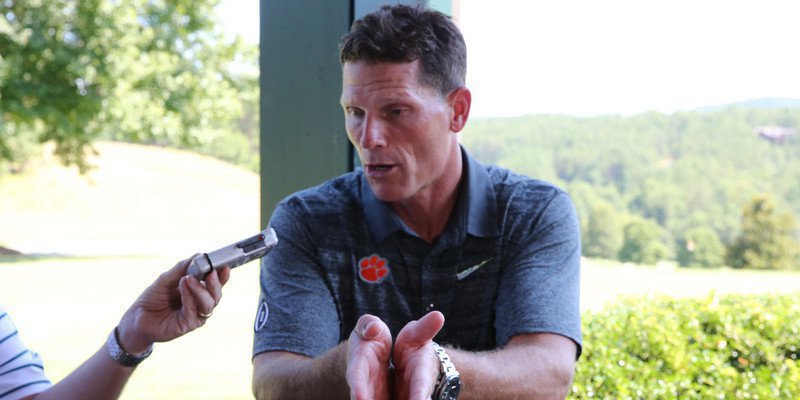 Electricity to Clemson’s campus was out early Monday morning, giving staff and students alike a Monday away from the grind (even though employees were told they had to take a leave day). Perhaps Duke Energy should have plugged into defensive coordinator Brent Venables, because that dude is providing plenty of juice these days.

In case you missed it, Clemson went on a bit of recruiting roll last week with six commitments in eight days. I had to scroll back through the archives of TigerNet to find out the last time recruiting was so hot – in 2014 there were five prospects that committed around the spring game (Chad Smith, Kelly Bryant, Jake Fruhmorgen, Gage Cervenka and Kaleb Chalmers).

Venables was the main recruiter on Sheridan Jones and Bryton Constantin, but it’s been obvious with all of the defensive recruits that we’ve spoken with that Venables is a big reason Clemson got the nod. I don’t think Venables is working any harder, but I do think that the rest of the country is beginning to see what the Clemson defense has been able to do under his leadership.

Clemson finished fourth in total defense in 2017, 8th in 2016, 10th in 2015 and was ranked number one in 2014. That’s four top ten finishes in four years, with what seems like a different cast of characters each season.

Venables isn’t resting, however, he’s out there recruiting the next wave of great defenders and the high school players are taking notice how the players develop under Venables’ tutelage.

The coaches went back out on the road recruiting Monday, and one of Venables’ first stops was with Mineral (VA) Louisa County 4-star linebacker Brandon Smith. Smith spent time with Venables on a visit earlier this year.

“It was awesome knowing you are talking to one of the best defensive coordinators in the country,” Smith said. “And he is a linebacker coach as well. His passion and his style of coaching is interesting for sure.”

*As for Clemson’s recruiting rankings, it doesn’t mean a whole lot at this stage of the process, but the Tigers did make big jumps in the big three of Rivals, 247 and ESPN.

*Expect more offers to go out as the coaches hit the road for the evaluation period, and the next batch of commits typically occurs around the time of head coach Dabo Swinney’s high school camps in early June. The first camp is June 5-7, and the second camp is June 12-14.

*For those who hate the long, hot summer, you have those dates listed above to think about, and the season unofficially kicks off most of us about a month later. Swinney’s media golf outing (when we get to speak with Swinney and all of the assistants) will be on July 17th, and the ACC Kickoff in Charlotte is July 18 and 19.

Eighty-four days til the golf outing.