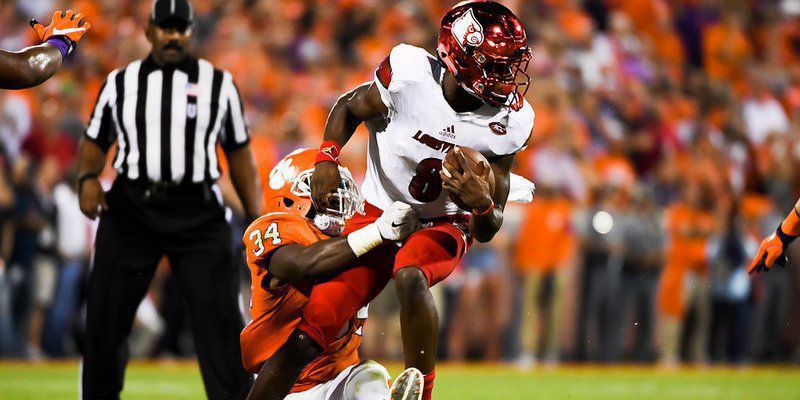 CLEMSON – Opposing defensive coordinators can only watch so much film of Louisville quarterback Lamar Jackson before they get sick.

At least according to Clemson’s Brent Venables.

Venables is the latest to get his shot at defending the Cardinals’ dynamic quarterback this weekend, and Venables says Jackson is different than any other quarterback he’s faced.

"I think he's really special. Very unique, doesn't have the size of Vince Young but the things Vince Young was able to do- improvise, throw it, and run it and sometimes the worst thing you could do against Vince Young was cover everybody,” Venables said Tuesday. “Obviously Lamar has that in him as well. I think the schemes they have around Lamar are really exceptional, smart, and that's no big surprise. It's an excellent system, they've tailored it. It's not just a spread QB run game and stuff, it's a ton of things.

“It's very multiple, it makes him hard to defend. He's got a great arm and tremendous, natural, wiry strength. Even when you've got the free hitter, it's like a 50-50 ball for us on defense. You've got a free corner on a blitz and you saw that last week against North Carolina and he throws a 75-yard touchdown and the corner just falls off of him and he throws a strike for 75 yards. Those are the kind of things a special player can do, it's one thing to take what's there. He can make something out of nothing all day."

Watching too much can make you sick.

"I mean some of it's fun. Then the more you see of it, the more sick you get,” Venables said. “I'll be honest it's because of all the plays he makes when it's not there. Then you're like 'Okay that's a good call,' and then you're looking for the result and it's plus nine. We're going to have to play really well and play strong and physical in space and compete for balls. Going to have to win the balls in the air and play with great technique. Have great eyes, good fits, all of it man. There's not a lot of room for error with these guys, he'll make you pay. Systematically they'll make you pay and then he can make you pay."

Venables says he can he murmurs from the back of the room when he shows his defense Jackson’s film.

"You get anxious and are excited to get to practice and run through the plays and show the guys the film,” he said. “When you show these guys the film, very quickly they get on the edge of their seat and you start hearing them mumble in the background and you know they have respect for what they are watching on tape."

He then drew laughs when he was asked about Louisville’s offensive struggles down the stretch last season.

"Yeah, I didn't see them down the stretch, though,” Venables said. “We played them early and they were in sync and that's kind of who I remember and know they can be. They've started strong these first two games. They had like 8,000 yards against North Carolina last week. It was eight or 9,000 (laughs)."

Jackson has been known to leave the pocket at the first sign of pressure, but Venables says he doesn’t see it.

"I didn't think he fled too quickly a year ago. I don't know,” he said. “I know he's got a great arm and has excellent receivers. If he's looking to pass, you better cover them. If you cover them, you better be able to come get him. I thought he was really good. He won the Heisman."

Will Venables revamp his game plan this season?

"You always start over. They are no dummies (Louisville). They will probably see things that were not good for them that we might have done,” he said. “I've always been used to starting completely over. You reference the things that were good and the things that weren't good in particular. Every year, you major in different things and it just depends on what you are doing systematically. Paul Johnson, he'll add small intricacies to his systems and change-ups so you got to go back and see who they are right now and go backward from there."