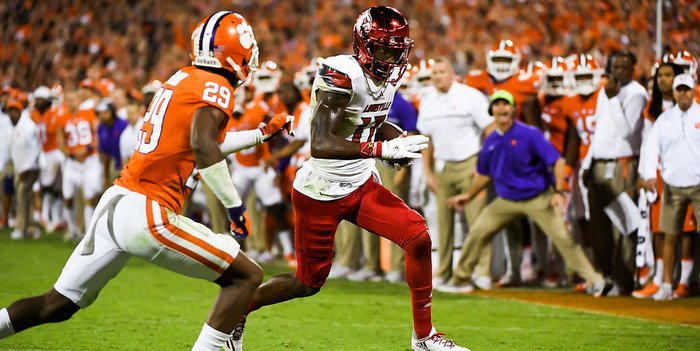 CLEMSON – Brent Venables walked into Tuesday’s interview session in the WestZone, his raspy voice and tired gait showing the strain of a few weeks of late nights, weird start times and a quarterback named Lamar Jackson.

Clemson defeated Louisville 42-36 late Saturday in Death Valley on a night when the Cardinals ran 99 offensive plays, and when Venables was asked about the health of his defense after that major workload, he smiled and said he was tired, too.

Clemson played on Thursday night two weeks ago, played a late game Saturday at home and now travels to Boston College for a rare Friday night game, and Venables said the changing schedules have been a pain to deal with.

“Another big challenge is the quick turnaround on another short week to get ready,” he said. “I finished grading tape at 4 a.m. on Sunday and I was back in here at mid-morning on Sunday getting ready for practice. I don't want anybody to feel sorry for me. Trust me, it's not a pity party. But, that's the circumstances were are practicing under.”

He then said that he was proud of how his defense competed.

“I thought our guys held up incredibly well. That certainly was not the plan, but anytime you give up five possessions you are going to give somebody more opportunities to snap the ball,” Venables said. “Louisville took all those reps, too. That quarterback (Lamar Jackson) did not sub out with anybody. I would be hard-pressed to argue that he probably had a harder and more physical challenge than anyone on that field.

“We are real proud of our guys. It was a great challenge. Our guys played all the way to that very last play, to that final whistle, played with incredible effort. Going back and watching after the game, just how hard we competed, you are proud of as much as anything.”

“There are some similarities to Louisville. They don't have Lamar Jackson back there, but they do have a dual-threat guy who throws the ball really well. They don't just get into two tights - they are more diverse than that. They do some things exotically that are always difficult. They always have a nice new wrinkle package for us every year, and his guys are always tough and they are physical.

They have a very nice play-action package out of what they do. If you recall in 2014 we had plenty of guys get behind us against a very talented and experienced defense with pretty much the same style of play. They have a ton of personnel packages, too, that create different issues, too.”

What happens to Christian Wilkins when Austin Bryant returns?

“He can do whatever he wants to do. Just ask him (laughing). What he has been able to give us through five games has built some competitive depth all across the front. It's given some guys more opportunities to improve and get experience. A guy like Albert Huggins - he kind of realizes he likes playing just a little bit and he's practicing a little bit better. That's what it takes sometimes for guys to get their opportunity. So I think the plan would be to continue to play him outside and then inside as well.”

“It's great. I am happy for him and I think it will help him as much as it helps us. I am happy for him and it was a big play in the game. But it's what he's supposed to do. He had good zone eyes and we were giving up the two to the flat, and if they throw to the flat you rally to it and he did well in that situation. He did it textbook. He got him out and it was great for Marcus and great for us.”