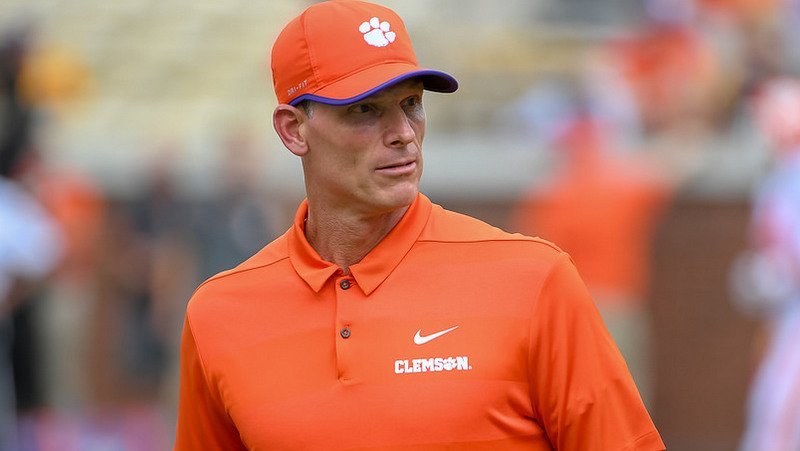 Venables took in part of the game between LSU and Alabama last weekend.

CLEMSON – While the Tigers were making final preparations for N.C. State last Saturday afternoon, the ‘game of the century’ between Alabama and LSU was just getting underway and quickly caught the attention of the Clemson coaches, even if just for a few minutes.

Defensive coordinator Brent Venables is intense in his game prep but also likes to watch what’s going on throughout the world of college football, especially when it could be a potential opponent down the road.

"Yeah, I like to keep preparing while I have games on," Venables said earlier in the week. "You got your computer with your cut-ups (on one side) and your game on (the other side). I like to keep up. What would I call here? Here it is, make a call. That's kind of fun. Sometimes you just turn the TV down and have it on too. Because you love what you do.

"It's not like, 'If they win then that puts us here.' I just like to watch. You love what you do. You love what other people do, you like watching it. I don't watch the ball very much. I watch the strategy. Where is everybody lined up? What's that blitz? The only thing about going on the road is you don't hav TiVo, so you can't rewind it."

Junior quarterback Tua Tagovailoa, who completed 21 of 40 passes (52.5 percent) for 418 yards and four touchdowns to one interception, headlined Alabama's talent with the deep stable of junior receivers and junior running back Najee Harris.

LSU, meanwhile, was led by fifth-year senior quarterback Joe Burrow. The second-year graduate transfer from Ohio State had his Heisman moment as he completed 31 of 39 passes (79.5 percent) for three touchdowns — all in the first half — and took 14 carries for 64 yards (4.6 average). Junior running back Clyde Edwards-Helaire also stood out with 20 carries for 103 yards (5.2 average) and three touchdowns, plus nine receptions for 77 yards (8.6 average) and a touchdown.

What Venables saw from the Tide and the Bayou Tigers was “frightening.”

“Well, I just saw some of it," Venables said. "Looked like a lot of great players on both sides of the ball. A lot of skill," Venables said. "Pretty frightening watching it. When you start watching that high-level skill, both quarterback and scheme, and the players, that can get a little overwhelming. I thought it looked pretty good to me. Hated it for those defensive coordinators. Looked like a lot of problems you have to solve."

Head coach Dabo Swinney also caught a little bit of the beginning of the game.