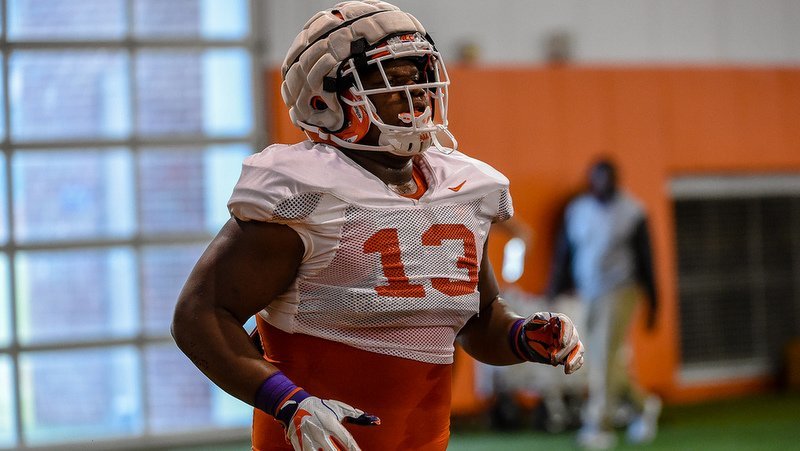 Tyler Davis has been an early standout in spring practice

CLEMSON – Brent Venables met with the media for the first time this spring Wednesday, spending almost 17 minutes talking about his re-tooled defense, the redshirt freshmen and the mid-year enrollees.

The following is a transcript of his Q&A session.

“Tyler Davis has been pretty good. I like them all. Xavier (Thomas) is better than he was a year ago. He had a good day. We have a lot of work to do.

“Reuben (Etinosa) has been really good. I’ve been really pleased with all of those young linemen. They’re coming on. They’re aggressive. They’ve worked really hard at knowing what to do. Far from perfect but really like the aggressiveness and the quickness - the twitchiness - of the group.”

“Joseph Charleston was hurt in practice today. He’s shown some stuff. He’s disruptive. Got some picks. He’s knocked some balls loose. Lannden (Zanders) had a pick on Monday and had a really nice play. He’s very smooth at picking stuff up. Ray Thornton is coming off of labrum surgery, so he’s not practicing.”

Who is stepping up as leaders?

“I would say probably Tanner Muse, K’Von Wallace, A.J. Terrell, Shaq Smith, Jamie Skalski, Nolan Turner, Denzel Johnson. That group of guys. I was remiss in not naming him as a leader. Logan Rudolph, as well.”

“Jefferies is playing pretty good, but he’s just not as big as you’d like. He’s about 265 pounds, and it’s just not big enough to play at this level, so if he doesn’t gain more weight, he won’t play a whole lot unless a disaster happens. The reps he’s taken, he’s been solid.”

“He’s been pretty good. He had a really good redshirt year. He was one of our players of the year for the redshirts. He’s aggressive, long, disruptive and really can run. He’s a very tough, physical guy. Probably 255 or 260 pounds right now.”

“I don’t know about the actual one-on-one scrimmage stuff, but in the PAW drill, he’s really been doing well. He’s at a much better place than he was a year ago. He’s still a work in progress but he’s been doing well, playing more aggressively and more consistently as far as knowing what to do.”

“He’s been good. I was remiss in not naming him as a leader. Logan Rudolph, as well. Those are two workhorses in terms of their work ethic and toughness and leadership. Justin has been good. He’s playing physical. Tough guy to move. He’s 260-plus pounds. Very heavy handed and I expect him to take another step from a year ago.”

“He’s tough. He’s physical. He plays fast. He’s super, super smart. He was in that film room with all of the other d-tackle. Since we got back, they’ve been in that dang film room. Their film is right next to our staff room, and they’re in and out all day every day, and it shows. Those guys know what to do for the most part. They haven’t been perfect but they’ve got a super good knowledge base to them, and that’s part of it - being able to play aggressive and learning new verbiage and language and to go out and execute it. We’re installing fairly aggressively, maybe not quite as much as we normally do, but still putting a lot on them and they’ve responded well.

“Tyler has kind of led the charge in that group. The other guys have worked every bit as hard. Tyler is very, very intelligent. Things come easily to him. He plays with quickness, heavy hands can really move his feet and bend. None of them are afraid of the moment either, and that’s what you like about them. It’s a very aggressive group of guys, very eager to learn but yet they have humility and toughness to them. So far, so good. They’re great young guys, too. Just fun to be around and very focused, whether it’s school or the weight room or the mat drills and now we’re in spring ball. I’d be hard pressed to pick out one of them that’s had a really tough day or tough moment or tough transition. They’ve all transitioned really, really well fortunately for us because we’ve needed them all, too. Usually, that doesn’t happen. Usually half of them do, and half of them don’t.”