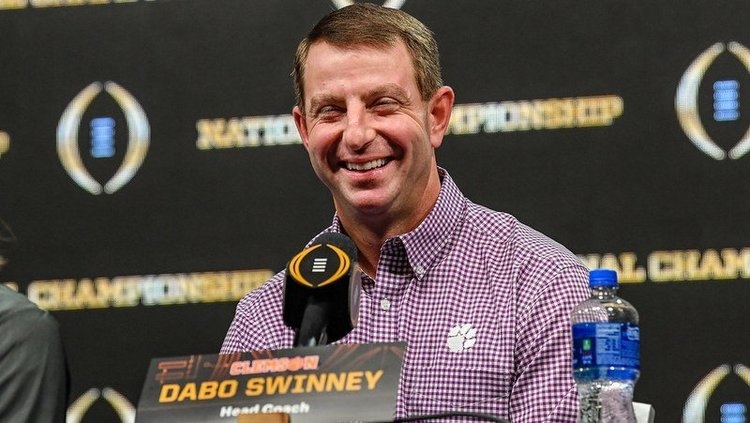 CLEMSON - Football is back, and today is head coach Dabo Swinney's media outing. Instead of The Reserve, however, it's being held at the Reeves football complex. We will update this space as the morning progresses.

More to come...Tony Elliott at the podium now.

*Elliott said the timing of Tavien Feaster's departure caught him off guard.

"The timing of it caught me off guard," Elliott said. "The decision didn't take me by surprise because he is a competitor."

*Tight ends coach Danny Pearman said when he heard the NCAA decision for Braden Galloway he was frustrated and disappointed. He said it was one of the most difficult conversations he's had to have, but that Galloway took the news well and is continuing to work with a good attitude.

*At punt return, Derion Kendrick will get the first shot in place of Amari Rodgers, who is recovering from a torn ACL.

*Clemson O-line coach Robbie Caldwell talked up the transition for junior Chandler Reeves to guard. Says he's looked good with his 'hand in the dirt.' Reeves is listed as the backup right guard to Gage Cervenka. Caldwell also said he is expecting big things from redshirt tackle Jordan McFadden, expecting him to push for playing time at one of the tackle positions.

* Clemson QB coach Brandon Streeter said that freshman mid-year enrollee Taisun Phommachanh has gained 20 pounds since stepping on campus, up to 222 pounds now. "This kid is grinding every day and wanting to get better," said Streeter.

*Safeties coach Mickey Conn said he hopes that the leadership on defense will come from the backend with guys like K'Von Wallace, Tanner Muse, Denzel Johnson and Nolan Turner all being upperclassmen.

*Cornerbacks coach Mike Reed said that he wasn't sure if head coach Dabo Swinney was serious when he initially sent Derion Kendrick over to play corner but Kendrick's competitive spirit allowed him to fit right in and he was up for the challenge from the beginning.

Venables balked at the idea of there not being enough depth, which showed with few numbers on the initial depth chart released in the Clemson media guide.

He said that James Skalski, who coaches are expecting big things out of, is at middle linebacker and not weakside and graduate Chad Smith at is at weakside and not MLB. He said Baylon Spector and Mike Jones Jr. are working at weakside, with Jones Jr. also at strongside. He added that freshman Vonta Bentley will work at weakside as well and Keith Maguire will move all around.

* Clemson DE coach Lemanski Hall says he has five players he trusts right now. Xavier Thomas, Justin Foster, Logan Rudolph, Justin Mascoll and K.J. Henry. His goal in fall camp is to find a sixth guy but he is comfortable with the five he has right now.

He also said Logan Rudolph came out of the spring as a starter in his estimation.