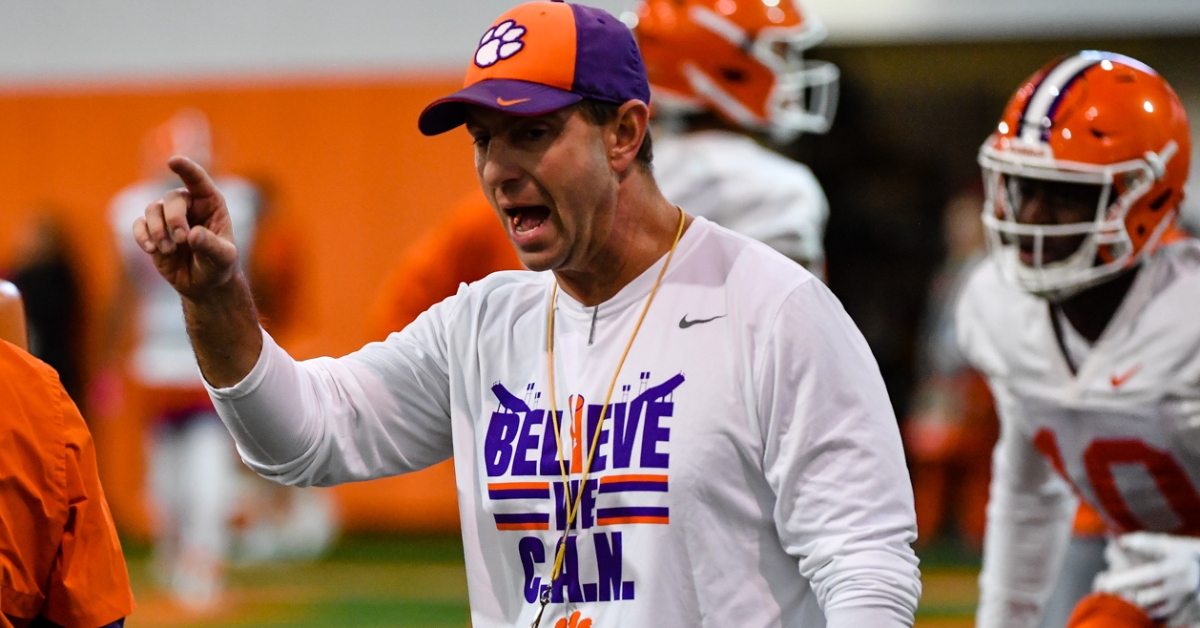 Dabo Swinney has always believed he can.

Dabo Swinney has always been an underdog. Whether it was the undersized receiver looking for playing time in high school, the walk-on fighting for a scholarship at Alabama, the grad assistant who was looking for a full-time job or the wide receivers coach named interim coach who wanted to be a head coach, Swinney’s life has been about fighting for every scrap.

Being an underdog is Swinney’s drive, and despite all of his successes, when he looks in the mirror, he sees an at-risk kid from Alabama who was rated a D-plus hire.

No. 3 Clemson takes on No. 2 Ohio State in the Fiesta Bowl next Saturday and it doesn’t matter if the Tigers are favored or not, Swinney will always feel like the underdog. It’s something he thinks about every day.

“I mean, that's my drive. I think we're all shaped by our experiences and how we grew up and how we have lived our lives and what you've learned through that,” Swinney said this week. “That's who I am. That’s how I grew up. Walking on and the lessons I learned from that. The toughness, the work ethic, the drive, the stick-to-it-ness, the perseverance, the belief, and the will being greater than the skill. That's what drives me and drove me as a player. That's why I was successful as a player and why I earned a scholarship. You know, that's why I got a job. “

That drive has served Swinney well.

“That's why Coach (Gene) Stallings hired me as a grad assistant,” Swinney said. “Then wouldn’t let me leave, and then after I was a GA and done with that, he hired me full time. I’ve just always applied myself that way and worked that way. It didn't matter what I was doing. And when I got out of coaching for two years, and if you sat down and talked Rich Wingo, who was my boss, he would tell you the same thing. I was driven to be great at what I was doing.”

If people want to hate him because he works at Clemson, so be it. He is still going to work as hard as he can to be great at what he does. It’s what the underdogs do.

“You know, there's a lot of people that don't like me just because I have a logo on my shirt,” Swinney said. “Because I work at Clemson. A man has gotta have a job. If you hate me because I work my butt off to do great at my job, then you’ll just have to hate me, because I will do the very best I can and to be great at what I do. I don't care what it is. I want to win, you want to win, and I want to win the right way.”

Clemson has had plenty of success on the field, but Swinney is just as proud – maybe even prouder – of what has happened off the field.

“I want to serve my players doing it. That's just my drive, I want to impact lives,” Swinney said. “I want to give, I want to use this platform to make a difference in this world, in this community, and certainly in my players, and in my coaches' lives. That is my drive, and I want to glorify God doing it because that's my purpose in life. You know, if I was growing up today - addiction in the home, no education, parents married at 18, my dad's an appliance man, fixes washers and dryers and hauls washers and dryers and refrigerators and stoves - if I was growing up today, I would be labeled at-risk.

“That's what we do now, we label people, and I would be labeled at-risk. I tell people and joke, but it's the truth, when I was hired, I was an at-risk hire. People see Coach Swinney, and they see they see this shiny version of Coach Swinney. That's not what I see when I look in the mirror. I see that at-risk kid from Pelham, Alabama. That's what I see. That's hungry, that's driven and that wants to make a better life for his future family, for his mom or his dad. For his brothers. That's what I see, I don't see any of that other stuff. I see the same guy, and that's what drives me.”

Swinney remembers when a media outlet graded Terry Don Phillip’s hire of Swinney as a D-plus.

“I still have that graphic from ESPN that labeled, that graded me and said I was a D-plus hire," he said. "So, I'd say if you're D-plus, you're an at-risk hire. I'm just a D-plus hire from Pelham, Alabama, an at-risk kid from Pelham. And that's just how I look at it.”