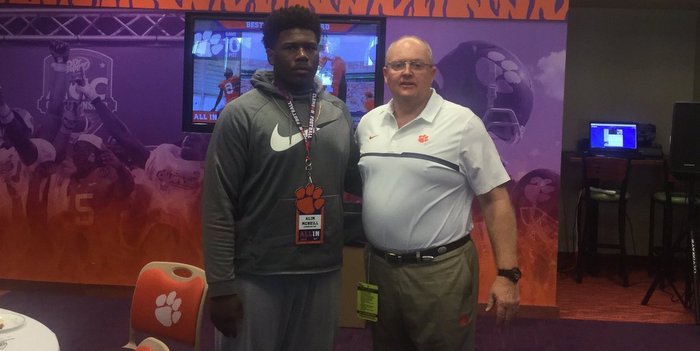 Alim McNeill’s recruitment has exploded since the beginning of the year, and he added the national champion Clemson Tigers to his list of 33 offers Monday night.

However, McNeill said getting the good news from defensive coordinator Brent Venables and offensive line coach Robbie Caldwell is something he’ll never forget.

"Coach Venables called my head coach and told him," McNeill told TigerNet Tuesday evening. "Later that night, Coach Venables asked me to call him and Coach Caldwell and I called them and they told me they were offering me a scholarship. It's definitely special with them being the national champions. Also, I just love the coaches there a lot. The atmosphere was great. I can't wait to get back there so I can tour campus because I haven't done that. This one means a lot, definitely."

One of the things that immediately stands out to McNeill is Clemson’s reputation for putting defensive linemen in the NFL.

“It's good to know that they have a tradition of building defensive tackles because that's my position,” McNeill said. “I'm looking at that as best I can because that's really important to know.”

The 6-3, 270-pound prospect visited Clemson last fall for the Pittsburgh game and he said he came away impressed with the overall atmosphere.

“The game atmosphere was crazy,” McNeill said. “Even though it was just Pitt, you would think it was a rivalry game. The fans and everything were crazy.”

He’ll make his long-awaited return on April 29th, when he hopes to see more of the campus and the academic side of Clemson.

“I'm coming down with my family,” he said. “I want to see the entire campus. I want to take a tour of all of the facilities and then take a campus tour so I can see everything. I want to talk to some academic advisors.”

McNeill said he wants to make a decision in December, but being an early enrollee isn’t an option because he hopes to continue his baseball career in college, an option he’ll explore with head baseball coach Monte Lee on his visit.

“I play baseball, so I can't graduate early. I play right field for my school. I'm looking to play college baseball. I'm going to talk to the head coach of the baseball team,” he said. “As far as the Clemson baseball team, I know everything about them. They're third in the country right now.”

With his recruitment far from over, McNeill said every school is on equal footing.

“As of right now, everybody is pretty much equal because I haven't take a lot of visits yet, but I've liked every place I've been so far,” he said. “Clemson can definitely sneak into my top group, without a doubt.”

McNeill plays linebacker for Sanderson and tallied 82 total tackles, 18 tackles for loss, six sacks, two forced fumbles and an interception as a junior. Offensively, he carried the ball 15 times for 69 yards and six touchdowns and caught four passes for 24 yards and a score.