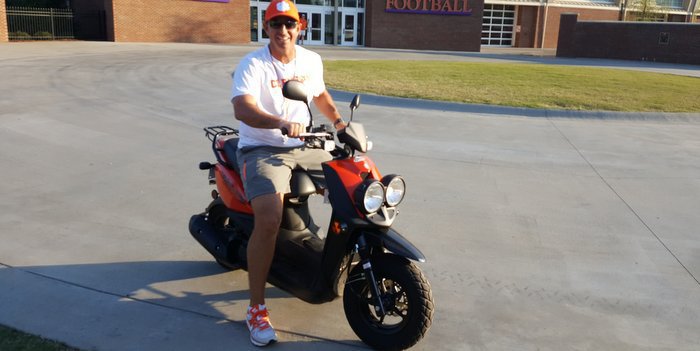 CLEMSON – Clemson head coach Dabo Swinney rode his special moped to and from practice Monday afternoon, but don’t think things were as easy as a slow ride on a warm spring day. In fact, Swinney spent much of Monday’s practice calling out players that he wants to see step up their game.

The Tigers have just two practices and Saturday’s Orange and White Game left on the spring schedule and Swinney said he wants to see certain players take more ownership of their game – and playing time.

“We talked about it a lot today. We have one more really competitive day, and that’s on Wednesday, but the bottom line is we’re getting ready to go into our exit meetings,” Swinney said after practice. “We can only evaluate based on what we see, and just seeing some guys take a little bit more ownership in the bigger picture, and not just the backups. I went around today and kind of caught a couple guys off guard — maybe it’s a young guy that’s not in the mix right now, and I’m like, ‘What’s the call?’ He doesn’t even know the call, so how are you going to ever get better if you’re not at least getting the mental rep?”

Swinney said some of the players are going to have a “rude awakening” sooner rather than later.

“So, just everybody taking a little bit more ownership in their position and in their performance and understanding that all we can do is evaluate them based on their performance — not their potential, not their recruiting ranking, all that stuff,” he said. “We get 15 days, and then you have academics, you’ve got the decision making, you’ve got the strength and conditioning, you’ve got all these things that kind of go into our thought process as far as how we come back and set the depth chart and so forth. And some of these guys, they’re going to have a rude awakening coming. Because one of the things I do believe in, and one of the reasons I think we’ve been so consistent, is the way we practice and how we rep so many guys. I really believe in giving everybody an opportunity to learn the system, giving everybody an opportunity to go compete. They can’t say that we haven’t given them that opportunity.

“Some guys just aren’t good enough right now, and that’s OK. I have no problem with that. Kevin Dodd was a redshirt freshman, and he wasn’t good enough either. I’m a very patient guy as long as I see guys that are bought in, willing to put the work in, know their weaknesses and they know what they have to do to get better. Rome’s not built in a day. I just want to see that commitment, so we have a few guys that have to step it up and take it to another level. They know who they are, and I’ve put some of them on notice because when this week’s over, the spring’s done, and it matters. Everything we do matters, especially when you have a lot of competition going on at every position. So, just looking forward to hopefully finishing strong.”

The Tigers worked on situations midway through the practice, and Swinney detailed those who stood out – both good and bad.

“Today was kind of a half-scrimmage type of a day, and just continuing to work some situations. Really wasn’t pleased with the two-minute at the end,” Swinney said. “Offensively, we dropped a couple balls. A couple big drops — Renfrow had one, and Fuller had one. We gave up a sack, but then defensively, just guys understanding the situation. Tanner Muse gets a great interception — offense has no timeouts, takes a touchdown to win it, 20 seconds. He picks it off, and he’s going to go “Prime Time” and try to run it all the way back to the house, and that’s how you get beat because all it takes is a strip, fumble, scoop, score, and you lose.

“But that’s why we’ve got to practice and put these guys in those situations. But it’s just like a great baseball player — you know what you’re going to do prior to it happening. You’ve already processed that, and that’s where we’ve got to grow with some of these guys in just understanding the system, number one, but certainly the situation. It’s more than just talent. We’ve got to be intelligent. So, I’m a little disappointed in some of the things that we did today, but we’ll learn from it.”

“He had a good day today. He threw a great touchdown pass to Seth Ryan today. Just a really beautiful play. Great catch, first of all, by Seth, but a beautiful throw, timing. I thought Kelly had a really good day today. In fact, I thought our second offense had a better day than the first offense today, and that was good to see.”

Anything you wanted to see Deshaun Watson improve on this spring?

“Some of the things that we need him to improve on, it’s a little harder in the spring just because he’s not live from a sack standpoint and some of the things in the run game. But the biggest thing for him is really asserting himself. He’s going to do everything. You don’t have to worry about him because he’s going to always go above and beyond of what you ask of him, always, but there are times where, especially with his role now and the respect that he has, where we really want him to grab a guy and just pull him. I think that that’s what he’s doing a good job of. Because we’re going to need that all summer. He’s in a position where he can really lead this football team, and we want him to take advantage of the respect that he has from the entire team, not just the offensive guys.”

Have any players impressed you?

“I will say Denzel (Johnson). Denzel’s a kid that really keeps catching my eye. Tackler. He made three or four or five tackles out there today. Fast. I think it was Tyshon (Dye) who had a long run down the sideline, and he took a great angle. Physical kid. He’s still learning the big picture, but he’s a guy that I think is taking advantage of his opportunity.

“Same thing with Muse. Those two guys I’m really excited about. Two ballplayers. But I think there’s several guys that kind of fit that bill. I think a guy like Noah Green. Nobody’s really said much about Noah Green, and he’s kind of been banged up here and there, but man, he’s really shown some things when we have had him that you know what, this kid, we see why we recruited him. He’s got a chance to be a good player here if we can just get through the hump of some of the setbacks he’s had.”