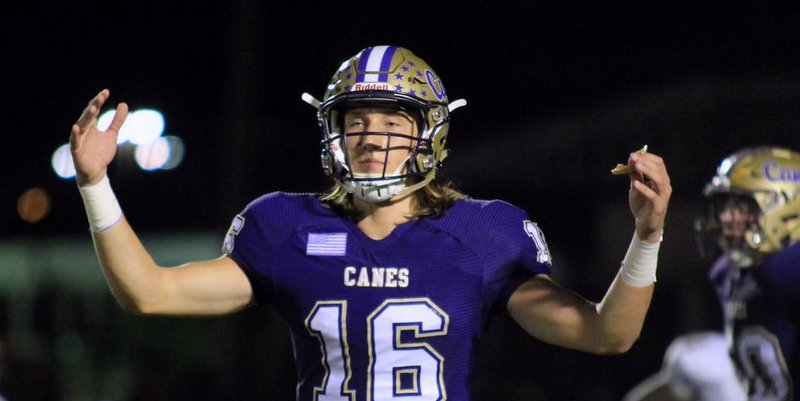 Lawrence threw for 403 yards in the win

Midway through the second quarter, the student section at Cartersville High School started chanting, “It’s too easy” as the Canes roared out to a 31-3 lead over visiting Bartram Trail. It wound up being not that easy, but Clemson commit Trevor Lawrence was impressive as the Canes held on for a 52-45 victory.

Cartersville (2-0) has won 32 games in a row and hasn’t lost since the 2014 Class AAAA State Semifinals. Lawrence ended the night with a spectacular line, completing 18-of-22 passes for 403 yards and four touchdowns. He was named the GEICO MVP of the game. Bartram Trail falls to 0-1.

Lawrence showed mobility, arm strength, accuracy and poise in reinforcing why he’s considered the number one pro style quarterback in the nation. He ran effectively, but it was his throws on the run that were the most impressive.

The Canes took the opening kickoff and marched down the field, covering 71 yards in six plays as Lawrence hit Jackson Lowe in the corner of the end zone from 11 yards out for a 7-0 lead.

A 23-yard field goal made it 10-0, and Lawrence didn’t throw his first incompletion until there was 5:01 left in the first quarter. On the Canes’ third drive, Lawrence hit Lowe over the middle and Lowe thought he had a clear route to the end zone. However, he was hit from the side by the safety at the three, the ball popped out and Lowe fell on the loose ball in the end zone for a 17-0 lead with 1:10 remaining in the first quarter.

The Canes took over on their own two on the next drive, and Lawrence made the Bears pay with an 82-yard throw-and-catch to T.J. Horton. Horton caught the ball in stride near midfield and race untouched into the end zone for a 24-0 lead.

Rico Frye made it 31-3 midway through the second quarter, and Lawrence made another impressive throw on the ensuing possession, rolling toward the right sideline and throwing back across his body into the end zone. Horton caught the ball as he fell into the end zone, completing a 36-yard scoring toss that made it 38-3.

The Bears scored two quick touchdowns to start the second half, with Gatewood leading the charge, and it was 38-31 at the midpoint of the third quarter. The Canes were forced to punt for the first time on the night on the ensuing possession, but the Cartersville defense forced a Bear punt and Lawrence and the Canes made them pay.

Lawrence hit Kaleb Chatmon on a laser from 13 yards out, driving the ball past the outstretched hand of the defender, for a 45-31 lead with 3:37 to play in the third quarter.

Riley Smith checked in at quarterback for the Bears, and Smith led the Bears down the field, hitting Xavier Hutchinson on a nine-yard toss and it was 45-38 with 11:17 to play.

The Canes failed to pick up a first down on the ensuing possession, and a punt gave Bartram Trail the ball at its own 25 with 10:11 left on the game clock. The Bears marched methodically down the field, and Gatewood hit Gunnar Hitzeman on a 34-yard scoring pass that made it 45-45 with 7:10 to play.

The Canes answered four minutes later. Frye and Lawrence led Cartersville down the field. A seven-yard run by Lawrence put the ball at the Bear two, and Frye bounced it in for the score a play later and the Canes led 52-45 with just over three minutes to play.

The Bears didn’t go away, however, and wound up at the Cartersville 11-yard line with three seconds to play. Gatewood lined up at receiver with Smith at quarterback, but Smith was swarmed before he could get the pass off and the Canes held on the for the win.