Lamar chases down Kelly Bryant in the spring game

CLEMSON – Tre Lamar knows his time to shine is now and he’s fighting for a spot in Brent Venables’ linebacker corps.

The sophomore out of Roswell (GA) played sparingly as a true freshman, tallying 22 tackles in 102 snaps over 15 games. Seven of his tackles were on special teams, however, and Lamar is looking to make a bigger impact on defense this season.

After backing up Kendall Joseph at the MIKE (or middle) linebacker spot a year ago, Lamar is pushing for a starting spot in the middle with Joseph moving out to Ben Boulware’s WILL (or weakside) linebacker spot.

Lamar says he learned a lot from watching Joseph last season while adding that enrolling in January was also a plus.

“Playing behind him was really big for me to see how he worked going into the season, how each week offenses change, so you need to change with it,” Lamar told TigerNet last week. “It was huge (enrolling early). I'm really happy I came in early because I feel like I got a huge jump. I really feel like I know what I'm doing now because I've had a whole year-and-a-half of really getting to know the playbook and the ins and outs of the defense. I feel good about it.”

The competition in camp has been fierce, with defensive coordinator Brent Venables stoking the competitive fires. 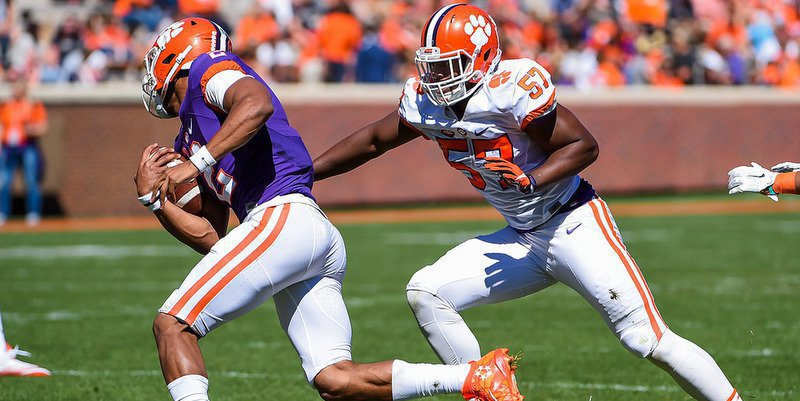 Lamar chases down Kelly Bryant in the spring game "

“He does that in meetings to everybody, so it's not just me,” Lamar said. “I feel like everybody is really trying to get a spot out there and you can see it in camp. Everybody is fighting really hard for their chance to shine out there.”

Venables has said that he’s working his linebackers at different spots, and Lamar says he sees the cross-training as a plus.

Lamar and the rest of the linebackers will lean on Dorian O'Daniel to lead the way.

However, all of the linebackers need to know which calls to make.

“All of us. If you're out there, you need to know what calls to make and give it to the d-line,” Lamar said. “You need to make your checks. You need to know how to adjust to each and every formation they throw at you and know who to talk to and when to do what you need to do. You have to play downhill and really attack blocks.”