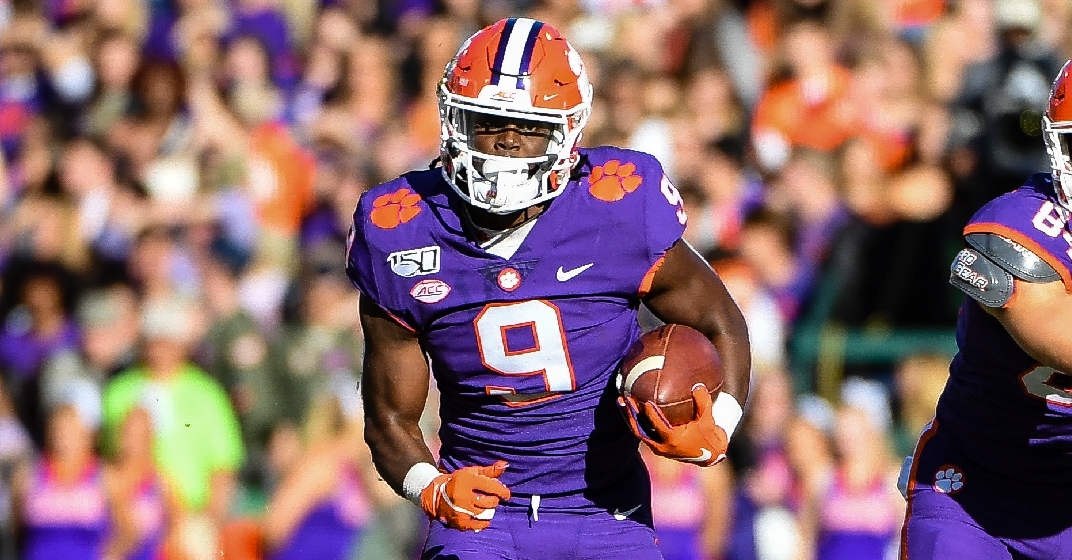 Once again, the Heisman Trophy winner appears to be a foregone conclusion with LSU quarterback Joe Burrow poised to become the runaway winner. But Heisman voters – and I am one of them – are selling themselves and Clemson running back Travis Etienne short if they fail to include the junior on their ballot.

With votes due in just three weeks (Dec. 9), we’re coming down to the final stretch in deciding who will make the trip to New York for the Heisman Trophy ceremony. Yes, Etienne deserves that early December trip to New York.

At this point, Burrow is deserving to be the frontrunner. He delivered another phenomenal performance last Saturday, carving up the Ole Miss defense for a career-high 489 yards on 32-of-42 passing with five touchdowns and two interceptions and adding 26 yards on the ground to lead the Bayou Bengals to a 58-37 win over the Rebels in Oxford.

In 10 games this season, Burrow has completed 268 of 341 passes (78.6 pct.) for 3,687 yards with 38 touchdowns and six interceptions while rushing for 215 yards and three touchdowns on 75 carries. He currently leads the nation in completion percentage while ranking second in passing touchdowns, third in both passing efficiency (202.7 rating) and Total QBR (93.2) and fourth in yards per pass attempt (10.8). However, early Heisman polls (no one has asked me) have Oklahoma quarterback Jalen Hurts and Ohio State quarterback Justin Fields second and third in the race (especially now that Alabama’s Tua Tagovailoa is out of the year).

Yes, the award is more of a quarterback award than anything these days and it’s that type of laziness that immediately discounts players like Clemson linebacker Isaiah Simmons, who has put together a phenomenal season.

It also hurts players like Etienne, who is putting together a historic season that is going largely unnoticed because he’s out of the game so early each week in Clemson blowouts and not getting the carries that other backs receive. In fact – hold on to your hats – Etienne has had just four fourth-quarter carries this season.

Let’s take a look at the resume:

*He ranks fourth in the country in rushing yards despite having at least 80 fewer attempts than any other player currently ranked in the top five.

*He is presently in the midst of a school-record six-game streak of 100-yard performances and has matched the Clemson single-season record with two 200-yard games this season (doing so on only 12 carries and nine carries, respectively, in those two performances).

*His yards-per-carry average is the best in the country among players with at least 100 carries, 1.69 yards of ahead of the player presently in second.

*He presently holds an 8.1 yards-per-carry average for his career, just shy of the NCAA record held by Army's Glenn Davis (8.26 from 1943-46) among players with 300 career carries.

*He is also a threat to catch the ball out of the backfield. Etienne had just 12 catches for 78 yards last season and struggled catching the ball at times. This season, he has grabbed 25 passes for 252 yards.

* Currently third in program history in rushing yards, Etienne is just 208 yards away from breaking Raymond Priester’s all-time record of 3,966 yards. Priester did that in four years. Etienne could do it in just three.

I know you can’t extrapolate numbers when you’re talking about football statistics, but if he had the 233 carries that Wisconsin running back Jonathan Taylor has this season, he would have 2,033 yards and people would be lining up to send him to New York.

Send him anyway, he deserves it.