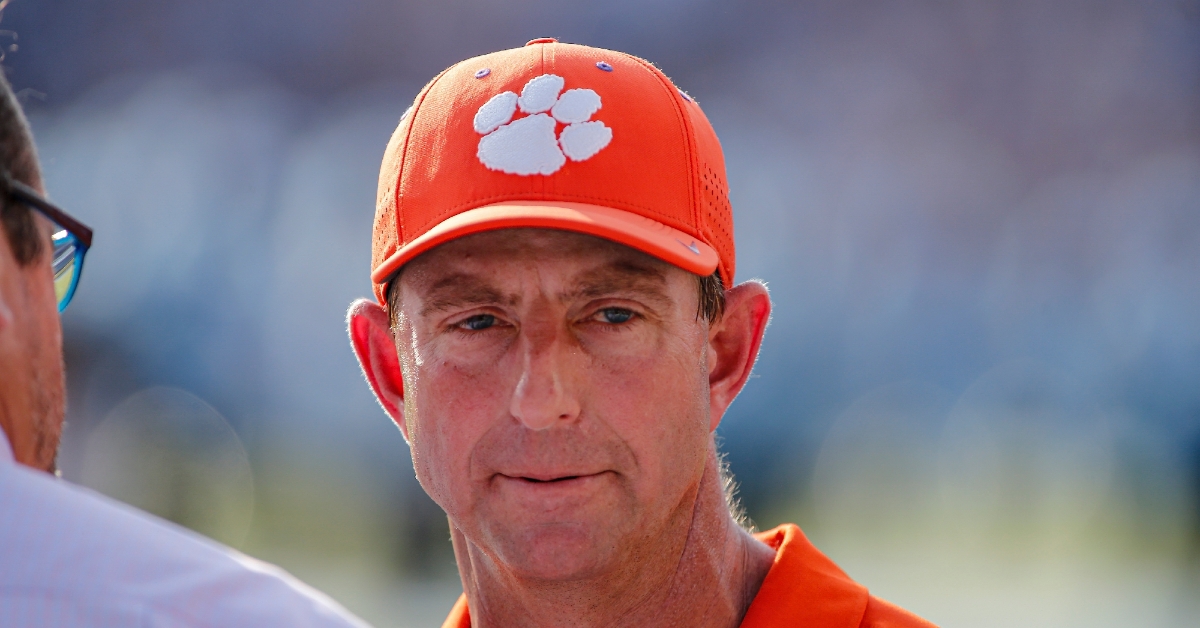 CHAPEL HILL, NC – Clemson head coach Dabo Swinney says that North Carolina outplayed the Tigers Saturday afternoon in Kenan Stadium, but a gutsy performance allowed his team to walk away with a win.

Clemson stopped a 2-point conversion with 1:17 remaining to help Clemson hold on in a 21-20 victory to improve to 5-0 on the season.

“First of all, I am unbelievably proud of our guys for finding a way to win. That’s what it’s all about,” Swinney said. “We obviously made enough mistakes to lose the game. I’d probably say they probably outplayed us. We had a lot of mistakes. A lot of critical, critical errors at critical times. But when we had to make a play, we made it. And that’s what winners do. So just really proud of our guys. It was a game that we certainly can learn a lot, and will. We’ll grow from it. It’s not easy to win. I know we’re supposed to just show up and beat everybody by double digits and all that, but this is college football. We’re a new team. This team is learning and growing.”

Swinney called it a gutsy performance.

“First of all, really proud of our guys. Just gutsy. A lot of mistakes that we had to overcome, but when we had to make the plays, we made the plays,” he said. “Just an incredible play there at the end on the two-point play, so that’s the first thing I’d say. Second thing is how about North Carolina? What can you say about that group? Unbelievable effort, and that’s what happens when you give a team momentum and all of the sudden they’re in a game like that. I thought their plan was excellent as far as trying to really slow the game down.”

The Tigers fell victim to several mistakes that ended drives.

“They make us put long drives together, see if we cannot make mistakes, and we proved that we were very capable of making mistakes,” Swinney said. “Lots of penalties, the turnover, you put a nine-play drive or 10-play drive together and get nothing. That’s a field goal. Just a lot of critical… The first third-and-1. We got two downs to get the one yard and we throw the ball out on the screen, and we easily got it, we just don’t have situational awareness. We don’t get the one yard. We’re trying to hit the home run instead of just taking a single.

“And so just didn’t do some good things there. And probably needed to hand the ball off there. Two downs to get one yard, so then we miss the field goal. And then we come back and we got a third-and-1, we jump offside. Then we jump offside again. We just couldn’t really get out of our own way. Missed a few plays, but again, their plan was to play a lot of four-man, two safeties to see if we’d just be patient. And then, if we didn’t get anything, all the sudden now you’ve taken some time and then they’re huddling up and slowing the game down. We made just enough plays, obviously for them.”

#Clemson coach Dabo Swinney saw the heart of his team in the 21-20 win at UNC on Saturday.

“Defensively, we played pretty good. We had the big play right out of the gate. They had a nice script there to open the game and caught us napping out there and had a big play on AJ [AJ Terrell]. Then we fumbled the ball and gave them the ball, they hit us on a little counter and they get a score there. Just a couple of big plays on their part. The longer the game went, and the closer that it was, and they’re still in the game, opportunity to win it, I thought they played with tremendous heart, tremendous effort. But I knew that. I knew coming in, I told our guys, ‘These guys are good enough to beat us. They’re good enough to beat anybody in this league. No doubt.’ Now, they’ve got to play well, and they’ve got to take care of the ball, they did. They had no turnovers. We had a chance for an interception a couple times, and we didn’t make the play. For them, they were going to have to play a pretty clean game, and they did. I thought they played really, really well. That quarterback, man. I like him. That’s why we offered him. He’s tough. He’s gritty. He’s a great competitor. He just kind of found a guy. That’s what he does. He improvises and makes some plays. Lots of credit to North Carolina and Coach Brown. You can, again, see that he’s got them believing in what they’re doing and playing with tremendous heart and tremendous effort.”

On getting the win

“But at the end of the day, it’s about winning. And we found a way to win the game. And again, whether you win by one point or 50 points, it’s a win. It’s kind of like when I make a birdie in golf. Most of the time when I make a birdie, it usually hits off a tree and runs across the green and hits off the golf cart, bounces back up here close to the flag, and I put it in and write three on my scorecard. Ain’t no pictures on the scorecard. A win is a win, and I’d rather learn lessons with a win than learn with a loss any day.

“Again, credit to our guys. Super proud of them. I think it was almost a year ago to the day that we had to battle with Syracuse last year. Almost right about now. That team went on to win the national championship. This is one week, and in college football that’s all that matters. It’s a week-to-week deal. It’s hard to win, and when you can go on the road and win, especially when you maybe don’t play your best game, I give our guys a lot of credit. I’m excited that we got an open date. We’ve got two weeks to get ready for Florida State. They’ve got two weeks to get ready for Clemson. We’re 5-0 after August and September. So we get back to play and it’s October. It’s moving fast, we’re almost halfway through the season here. Again, we’re 5-0. Not many teams out there that don’t have a blemish yet, so we’re super proud of where we are. But we’ve got to get better. We’ve got to get better. We’ve got to coach better. Again, I’m glad we got the open date and opportunity for us to get back to work, and we’ll be excited to play at home against Florida State here in a couple weeks.”

"No, I wasn't surprised, we talked about. I was glad they called a timeout because I was getting ready to call a timeout. I told Brent [Venables, Defensive Coordinator], because we wanted to coach up our two-point, I told them 'They're going to go for two if they score here.’ I was going to call timeout...so it gave us an opportunity to get our two-point posse together, and we did. Brent said we would probably get the speed option, they'll put the ball in the quarterback's hands and see if they could find a crease on us. What a play, I guess it was Chad [Smith] and Xavier Thomas, it was a heckuva play right there. Again, it came down to one play and that's what happens a lot of times. We made the play that we had to make to win the game. “

“I thought Trevor was gritty, he showed unbelievable leadership. They forced us to run him a little bit and man, he ran tough. He made some really key move-the-chains plays for us, and the touchdown on third-and-3. They were giving us numbers, so we knew we would have one more right there, it was a matter of getting in there. I thought that was a heckuva play for us, but the throw to Tee – we got a good matchup...and great throw and great play. As far as the totality of the game, just a lot of mistakes and we can learn from, but again, much more thankful that we can learn from it with a win than a loss. We are very fortunate that we were able to win the game.”

On lack of offensive consistency

"Rhythm. Penalties. I mean, those are critical when you don't get the first down, when you don't get a new set of downs when you got situations when it's third-and-1 and you are in a great spot and now it's third-and-6. Again, they played a lot of coverage, but we had Justyn [Ross] a couple of times and we just missed him. We missed him for a touchdown going into this end zone down here. We had it and we just missed the throw, and then we had him another time on the seam and he almost caught it - it was a little high - but he got two hands on it and we don't make the play right there. He had three plays and I think he had three catches. But you know, it's just one of them games. The rhythm of the game. The flow of the game, and you know, mistakes add up...Give them credit they outplayed us for most of the game.”