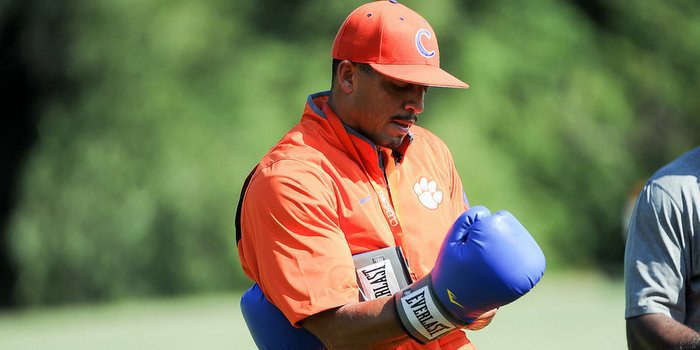 CLEMSON – Tony Elliott and the Clemson offense want to be prepared for Kevin Steele and the Auburn defense, and that means watching film from LSU, Auburn and Alabama as well as remembering some of Steele’s tendencies from his tenure at Clemson.

The two Tigers face off in the season opener at 9 p.m. next Saturday, and Auburn’s defense is led by Steele, who was at Clemson from 2009-2011.

“It's going well. Now that camp is over, they're back in school, we're getting a good opportunity to take a look at them on film and kind of figure out what they're going to do,” Elliott said Thursday. “Obviously, you're looking at what Coach Steele did at LSU last year and what he did this spring in the spring game. We're trying to turn over every stone in anticipation of what we're going to see. It's been good prep so far.

“You see a lot of similarities, but you also see some things that he's doing differently. He's got an Alabama background, so he's worked with Nick Saban. He knows that odd front, so you see him jump in and out of structure a lot like he did here. He can play odd, four down, man coverage, or zone. They're guys who do a really good job of disguising coverage, so you see a lot of similarities of when he was here, but you also see a couple of changes that he's developed over the years.”

“Lawson is very good. He's a guy that we recruited out of high school. He committed to Auburn early and then opened it back up, and we thought we had a shot, but ultimately he went back to Auburn. He's as fast as anybody we're going to see coming off of that edge. I know he's going to be anxious to play. He got hurt early in his career and missed some games last year, so he's going to be excited. He'll be as fast as anybody we'll see off the edge.”

“It's hard to tell because of every day there's a different guy coming into the mix. We know there're a couple of transfer guys at the linebacker position and also in the secondary. Watching them last year, we know they're physical guys. They move well. They're going to be well-coached. They're going to be physical. I know 18 - who moved to No. 6 (Carlton Davis) - is a very good player. He's long and can run.”

“Simpson has been playing at left guard. That's where he played in high school, and that's where he's most confident. He's a guy that has a skillset that you can move him to a tackle position in the future, but the big thing is getting him ready to play. Physically, he's very, very impressive coming in the door but mentally you don't want to overload him. Get him comfortable and get him confident and then we can cross-train him later.”