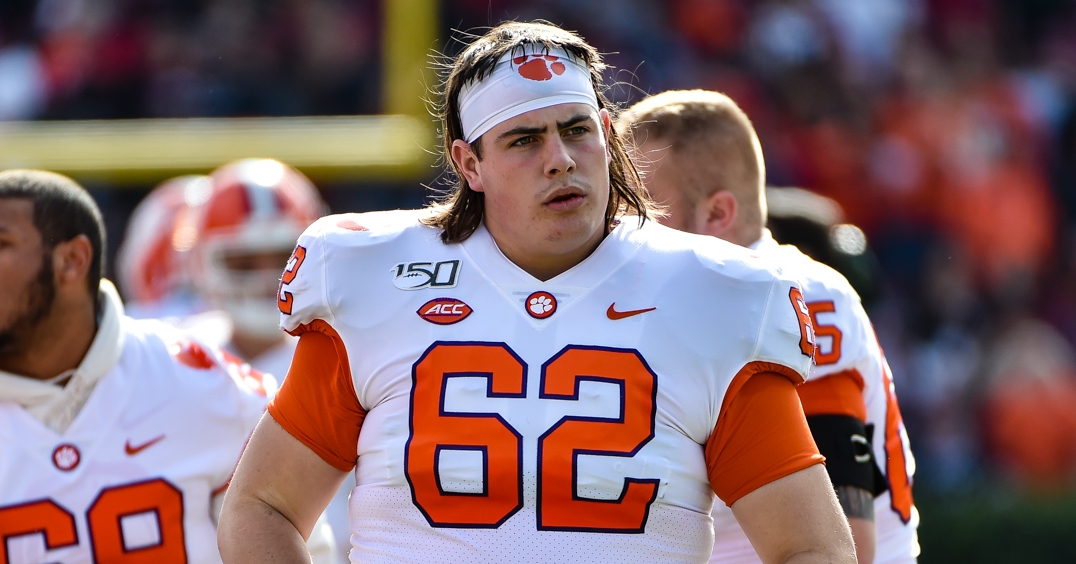 Stewart is likely to start at center this season.

As we inch closer and closer to the start of the season, in whatever iteration it will have, we are taking a look at three offensive and three defensive players who need to take another step forward this season.

In yesterday’s article, we told you about defensive end Xavier Thomas. Today, we take a look at center Cade Stewart.

The Clemson offensive line will have to break in four new starters this season after the graduation of Tremayne Anchrum, Sean Pollard, Gage Cervenka, and John Simpson. Stewart is expected to take over the center spot vacated by Pollard, but he isn’t exactly an unknown commodity. As the center, however, he is responsible for setting some of the protections and making sure each lineman knows who they are supposed to block when the Tigers run a zone blocking scheme.

The Six Mile native and graduate of nearby Daniel High School has extensive playing time on his resume and enters 2020 having played 698 snaps in 37 career games (one start, against Texas A&M last season). He told TigerNet during the spring that he doesn’t see a dropoff from last year’s offensive line.

“We have all kind of meshed together over the last couple of years playing with the second group,” Stewart said. “So, we all understand how each other plays and we have a lot of chemistry. We have all played together and we know each other and now we just step in and play the same ball because we understand each other that much better.”

Stewart redshirted as a freshman but quickly learned that he didn’t have to be a 5-star to earn playing time.

“Any guy that comes in when you're young, stars are what you need to get you here. But when you get here you have to start all over,” Stewart said. “It's a whole new system from what they did in high school. Everything is different. Everybody is the best in their state and everybody is the best at their position. Now you have to perfect your craft every single day and get better. I think that is what a lot of these 4-star and 5-star guys can do. They learn to adapt really well, and that is why we keep getting them.”

Stewart gets the early nod to start at center and he’s been working with all of the quarterbacks in perfecting his craft.

“Before spring ball started we worked a lot on our snaps. And Coach (Brandon) Streeter does a good job during practice rotating guys and we all get a good feel for who does what,” Stewart said. “Me and him (Trevor Lawrence) have been playing together for three years now and we have a good feel for how he likes the ball and he knows how I snap it. Every quarterback is different and they like the ball different, so we have to work on that.”