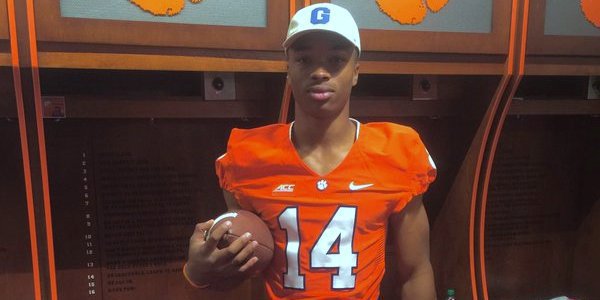 One of the nation’s top quarterback targets for the Class of 2018 traveled across the country and visited Clemson’s campus last week and liked what he saw. Now he awaits an offer.

Dorian Thompson-Robinson (6-2, 195) of Las Vegas (NV) Bishop Gorman visited Clemson for the first time last week, taking time to drive to the upstate while visiting family in Aiken. Quarterbacks coach Brandon Streeter reached out to Thompson-Robinson and extended an invitation to visit.

“It was fun. I was actually going down there to see family and I had Saturday off, so I figured I would go check them out,” Thompson-Robinson said. “Coach Streeter had wanted me to come and see things. All of the coaches weren't there because they were on vacation for Memorial Day, so I was with the GA's (graduate assistants) and they were showing me around and it was fun. It's a really cool place and they treated me well and it was a good visit.”

Thompson-Robinson said Clemson’s family feel stood out, even with most of the coaches on vacation. However, he also wants to make a return trip and meet Clemson’s head coach.

“They are building the new facility and I think that's really cool. One thing that really stood out to me is how they were family-oriented,” he said. “Everything was family based and how all the coaches were former players or something like that. I thought that was really cool. I want to meet Coach Dabo and see how he is as a coach and as a person. I want to check out everything when the coaches are there so I can see how the atmosphere is.”

Thompson-Robinson admits to not knowing much about the Tigers before last season, but the Tigers’ run to the National Championship game made an impression. Especially seeing the excellence of quarterback Deshaun Watson.

“I watched them through their playoff journey, but that was pretty much it,” he said. “I think they are a really good program, the fact that they made it to the playoffs was really good and seeing Deshaun doing his thing out there. Seeing how far they made it and how they competed with Alabama was really good. I think that if they had a couple of more minutes in that game, they would have won.”

Zerrick Cooper will arrive on campus this summer and the Tigers already have commitments from two signal callers for the 2017 class in Chase Brice and Hunter Johnson, but Thompson-Robinson says the coaches have told him he brings a little something different to the table.

“When I was down on my visit, the offensive GA was trying to walk me through the depth chart and who they have committed and everything,” he said. “They were telling me how I could fit in that offense and while they have some guys committed, they might not be able to run as well as me or fit in the offense as well as me, so I really do take that into consideration.”

Thompson-Robinson has offers from Colorado, Michigan State, Missouri, and Utah. Oregon and UCLA are also showing interest, and he hopes to visit Oregon this summer. He also hopes to get to a game at Clemson this year – if not he will wait and come back for an extended visit next spring because the Tigers are firmly in the mix.

“Probably this same time next year. I hope to check out a game sometime this year or next year,” he said. “They are pretty high on my list right now as far as schools I wanted offers from. Going across country is definitely not a problem for me. I have family all over the country and that is not a problem for me at all.”