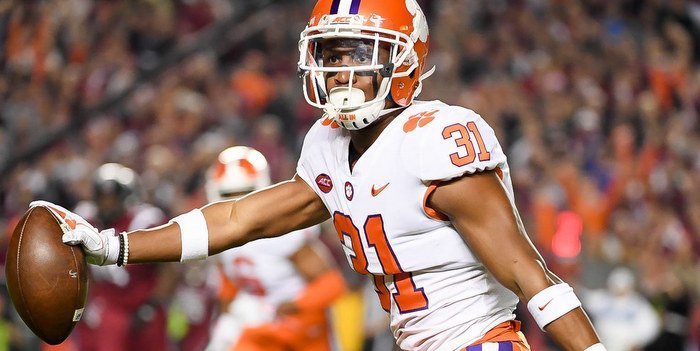 Last season’s Palmetto Bowl resulted in South Carolina being handed a 56-7 loss by Clemson, the school’s worst defeat in the rivalry since 1900. The Gamecocks’ motto became “never again” in reference to the team’s rally cry to never be pushed around or embarrassed like that again.

It happened again, and Clemson’s players and coaches said the phrase might have meant a little more to the Tigers, who defeated the Gamecocks 34-10.

“We had a little chip on our shoulder from hearing the stuff last year and we'll be ready for them next year when they come to the Valley,” wide receiver Hunter Renfrow said. “From hearing them say 'never again' for so long that we just wanted to go out there and finish the second half like we started.”

Co-offensive coordinator Jeff Scott said the coaching staff had a special message for the players.

“The biggest message was to not let up. That was the thing I was most proud of is when we got up 14-0, that's kind of the sticking point earlier this year,” Scott said. “We've had some games where we've been up 14-0 and maybe relaxed a little too much offensively. That's been a point of emphasis the last few weeks. The big message at halftime is it's 0-0, so let's squeeze everything we can out of these last two quarters and even though we're going to put in some backups, the standard doesn't change. We really want to put an exclamation mark on it and I felt like we did.”

Linebacker Dorian O’Daniel, who finishes his career 4-0 against the Gamecocks, said the Tigers imposed their will.

“To not to lose to South Carolina for my four years means a lot. I'm proud of this senior class,” he said. “I'm proud of this team and how we played tonight in all three phases - offense, defense and special teams. We imposed our will and we had fun doing it.

“It definitely motivated us because of some of the stuff they were saying prior to the game just kind of fired us up. Talking about how we weren't that much better than them last year and this that and the other. We used that as a chip on our shoulder and left no doubt.”

Quarterback Kelly Bryant said he was proud of the way the Tigers responded to adversity.

“Coach (Dabo) Swinney always talks about going into environments like this where everybody is against you and you have to bring you own energy,” Bryant said. “We played their little fight song all through the week. We just felt it. We brought our energy on the sideline and we were vibin' to it, as well.”

“It definitely motivated us. We heard it during the week. We kept hearing it so we took a lot pride in it,” Carter said. “We tried our best not to pay attention to it but it's something we kept hearing. We tried to make that a chip on our shoulder and have a little more intensity going forward because of that type of thing. It made us want it that much more, so it was big.”