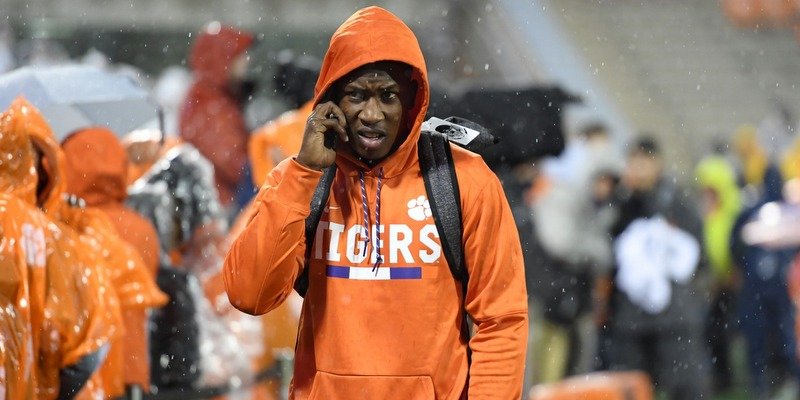 The red carpet is reserved for distinguished guests and important visitors, and even though a steady rain fell throughout the day, the Clemson coaching staff rolled out the red carpet for 5-star defensive end K.J. Henry.

Henry, out of Clemmons (NC) West Forsyth, took an official visit to Clemson last weekend for the fourth-ranked Tigers' home game against Georgia Tech. The Clemson coaches typically don’t accept official visitors before November, but Henry’s dad is a coach at Charlotte, and the 49ers had an off week.

The visit was the third official for Henry, who has also visited Georgia and Virginia Tech. He will also visit South Carolina and Alabama.

Henry has made several trips to Clemson, but this time was different because he was able to bring his family along.

“It went great. I’ve been down to Clemson multiple times. This time they really put down the red carpet for me and my family, just the experience of getting that family welcome, the staff and all the players, it went well,” Henry said. “When it comes to them, what I look for most is consistency since I’ve been there so many times. You just get that great feeling and you just hope that they can keep that up every time you go down there – that it’s real and it’s genuine - and sure enough, going back down there I got that same feeling again.”

While on campus, Henry met up with fellow 5-star defensive end Xavier Thomas of Bradenton (FL) IMG, a Clemson commitment.

“Thru this process you definitely not only want to see the success you’ll have as a football player but who you are going to be surrounding yourself with when the years come,” Henry said. “Knowing that Xavier is committed there is obviously something I’ve known. Getting to see Trevor Lawrence, I know him very well. Getting that feel for guys that are committed, you can put yourself in that spot of if I’m comfortable with these guys and playing with these guys.”

Henry has set his commitment date for December 20th, and he’s keeping his choice a secret until he announces.

“We will try and get in all of the home visits with the coaches. Then, we will sit down and talk about it. The last visit is when I’ll definitely start thinking about it harder, but to know for sure will probably come when I have that family dinner type talk,” Henry said. “I’m applying to all five for that exact reason that (right now) I don’t know (the school). It will be a quick turnaround from December 20th to mid-January. I’ll have to apply and have everything in for each school. I will know after that talk, and they are all so close and I’ve had great visits, but I will know for sure after we have that talk.”

Henry will be an early enrollee. He will play in the Shrine Bowl in December as well as the Under Armour All-American Game.