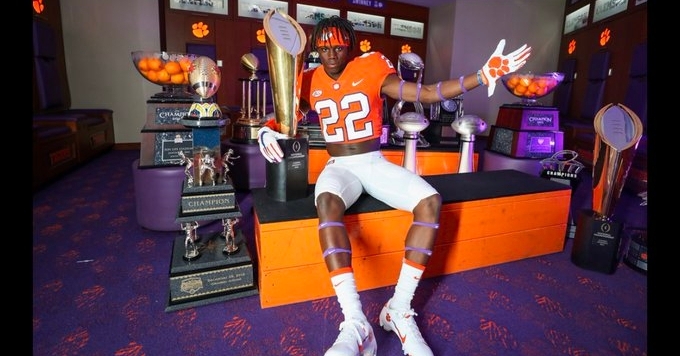 Rucker poses in front of Clemson's impressive array of trophies.

Going into Tallahassee to get a highly coveted recruit is rare, especially when a Florida State offer is on the table. Clemson has done it before with Travis Blanks, and now they’re looking to pull it off again.

De’Shawn Rucker received a Clemson offer in February and shortly after made the trip to check out the campus. Rucker, the 5-11 170-pound safety from Tallahassee (FL) Amos P. Godby, had the chance to meet the coaching staff and find out what makes Clemson more than just a football school.

TigerNet caught up with Rucker to discuss the visit and his plans for his recruitment. Rucker has been in contact with most of the Clemson defensive staff on a regular basis, including defensive coordinator Brent Venables. Rucker discusses football with the coaches, but something else has stood out to him about his conversations with the Tiger staff.

“Coach (Mike) Reed, Coach (Mickey) Conn, Coach (Todd) Bates, and Coach (Brent) Venables,” Rucker told TigerNet about which coaches he talks to from Clemson. “I usually hear from them every other day. Most people would think it’s always about football but they just check up on me and see how my day has been. When they say they are family-based they mean it. And the visit showed that.”

Rucker is being recruited as a safety, but being able to move around and play different positions is something that intrigues the Clemson coaches. Rucker will be able to cross-train at safety and corner, which means he will be learning from corners coach Mike Reed and safeties coach Mickey Conn.

What was his impression of Coach Reed and Coach Conn, and what are the coaches saying about his position at Clemson?

“Coach Reed and Coach Conn are genuine and hard-working coaches,” he said. “I got to see them coach at practice and it was pretty nice. They really treated me like family when I got there. They feel I can come in and play safety but because of my athletic ability they can move me around from safety, to nickel, to corner.”

Taking in a visit at Clemson means seeing the new football facilities, but Rucker made sure to take it all in. Rucker learned more about what makes Clemson special and how every player is prepared for life after football.

“I got to speak with the academic staff, training staff, and surprisingly the President of Clemson,” he said. “I got to see the locker rooms, dorm rooms, the football field, and the team meeting rooms. What stood out was a program called P.A.W. Journey, where if you don’t end up going to the NFL, you’ll be prepared for the real world and be able to have internships. I want to major in Physical Therapy or Athletic Training so if I don’t make it to the NFL, I can still help athletes and be around the environment I love.”

The visit to Clemson also provided Rucker one-on-one time with Coach Swinney and Coach Venables. What did Rucker take away from those conversations?

“Hard-working guy,” Rucker said of Swinney. “Just sitting down and listening to how he built the program was mind-blowing. I had some good one-on-one time with Coach Venables. I can tell he’s very determined to take down offenses.”

Rucker has an impressive list of offers, including Clemson, Alabama, Florida State, LSU, Oklahoma and many more. Rucker plans on visiting Clemson again, along with some other schools close to home. Which schools are at the top right of his recruitment, and when will he know when it’s time to commit?

“I’d really say when I take that official visit and talk with the coaching staff and see their plan for me,” he said of his plan to commit.

“It’s been tough making a top 5 or even having a leader. I’ve only visited 3 schools and with the coronavirus spreading and shutting everything down, it’s been tough.”

Aside from being a standout on the football field, Rucker also runs track at Godby. Rucker has been officially timed at a 4.53 40-yard dash to go along with a 40-inch vertical. Rucker currently squats 390-pounds, power cleans 265-pounds, and bench presses 240-pounds. It isn’t hard to see why many schools are after Rucker, but what exactly will those schools be getting on the field from Rucker?

“My strength is being versatile,” he said. “You can move me around a defense. The coaching staff that will be coaching me will be getting a playmaker.”

Rucker is currently a 3-star, ranked as the No. 17 safety and No. 46 player in Florida. Rucker finished his junior year with 62 tackles, 3 interceptions and 1 fumble recovery.