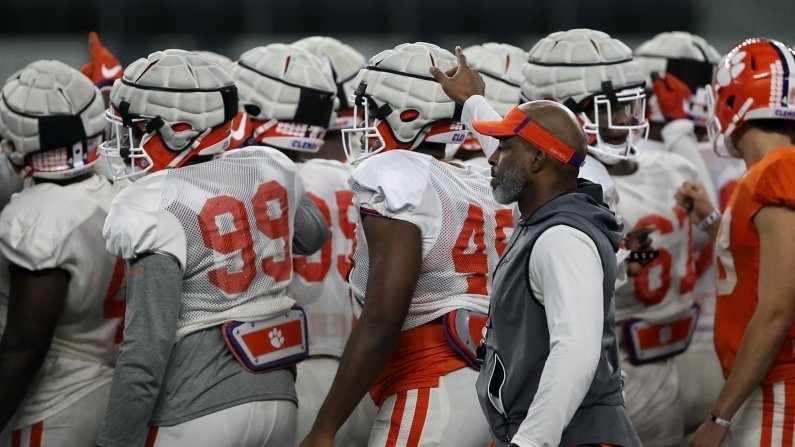 CHARLOTTE, NC – The Clemson football program is on top of the college football world following last season’s 15-0 season and demolition of Alabama in the National Championship. During the long season, there were many pivotal moments, from the insertion of Trevor Lawrence to starting quarterback to Chase Brice’s heroics against Syracuse to the end-of-season beatdown of any other team in their path.

The moment that started that train rolling? It happened during the dog days of August during camp. The days were hot. The tempers were short. Players were tired of hitting on each other, tired of the heat, tired of camp, and tired of the grind.

Fights started to pop up all over the practice field.

"It was just a day in camp. We were talking about the process of putting the team together and every team is different,” Swinney said. “Last year, we had a bunch of veterans. Highly-competitive people who had been going against each other for a long time. We had this one day in camp where we could hardly practice. It was just out of control. It was like every other player someone was getting into a fight.”

Swinney watched what was happened with the practiced eye of a coach and decided action needed to be taken.

“So we just blew the whistle and we just bear-crawled for the rest of practice,” Swinney said. “We went longer periods instead of running. That was kind of our practice. So all that time taken to script and get ready for a practice, that was just all wasted.”

The coaches, players, and everybody on the staff took notice and things changed from that day forward.

“It was about - the message being that we’re talented but we’ve got to get disciplined. And the same with the coaches,” Swinney said. “After that day, we didn’t have any problems. As soon as a scuffle might start, the players would jump in and be like, ‘We ain’t doing that again.’ I just thought we came together as a team that day. You’re seeing guys who were mad at each other and now they’re supporting each other. And the same thing with the coaches. More discipline."