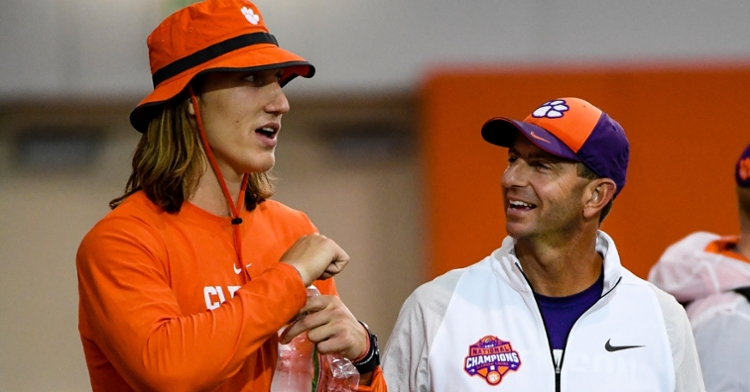 We hope to see plenty of this during the fall.

Dear sports, you are missed more than you can imagine.

Look, in this job, you have to love every time of the year or you couldn’t do it. Not do it and be happy. But this is truly my second-favorite “season” in covering Clemson athletics. The first is a no-brainer – I love when October rolls around the weather begins to change and the cupcake portion of the schedule (at least in most years) is over, even though you can argue the cupcake portion of the schedule has lasted 12 or 13 games for the Tigers over the last few seasons.

That final run through the last part of the regular season, the rivalry game, the ACC Championship Game and the bowls is fabulous and just one of the perks of covering the Tigers these days.

But I’ve always loved the May-June portion of the schedule. The Prowl and Growls are over, spring practice and basketball and some of the other sports are in the rear-view mirror and it’s time to concentrate on football recruiting and baseball.

I sat down yesterday and an alarm went off my phone, telling me it was time to head to Doug Kingsmore Stadium for the opener of the three-game series against Florida State. No, I haven’t taken sports off my schedule because it’s something I just can’t seem to do.

Without all of the craziness, Monte Lee’s squad would have played at Miami (FL) last weekend, played a midweek game against The Citadel this week and then hosted the Seminoles to close out the regular season. The ACC Tournament was scheduled to start next Tuesday in Charlotte, and I already had a room reserved at an apartment across the street from the stadium. My plan was to cover the Clemson games and for the other games simply sit in the stands and be a fan.

I also loved the baseball regionals, whether they were held in Doug Kingsmore Stadium or elsewhere. And while I love staying home and covering baseball, I don’t mind traveling to other stadiums and living on the road for a bit, and I’ve thoroughly enjoyed going to places like Auburn and Vanderbilt and even Ole Miss last season.

For the regional in Oxford last season, Nikki booked the room for me and Brandon Rink and said she thought I would love the accommodations. As it turned out, it was a two-bedroom log cabin just through a stand of trees from the baseball stadium, and the cheers could be heard with ease.

It was also a cabin near to a house that belonged to William Faulkner, the Nobel Prize laureate who hailed from Oxford. Hey, if you can’t write near a Faulkner house, it might be best to give it up.

June also meant the Dabo Swinney high school camps, and while the days are long and hot, they are never boring. Seeing the next wave of talent come through the indoor practice facility, watching the offers start to flow out and the commitments flow in makes for an exciting end to the “year” for me. Once the second camp ended, unless there was baseball, it was time to regroup and head to The Opening (either in Oregon or Dallas) in early July to start the next “year.” After that, it was just a few weeks until the ACC Kickoff and the craziness started.

While I doubt The Opening will be held this year, there is hope that the ACC Kickoff will happen and that a season will take place. I am not only hopeful, I like the chances of it all taking place.

On that end, I am hearing several good things. There are whispers that campus might start to reopen soon (the Esso Club opened this week) and we can start to get back to more of a normal schedule.

I hope so, because I’ve missed it.