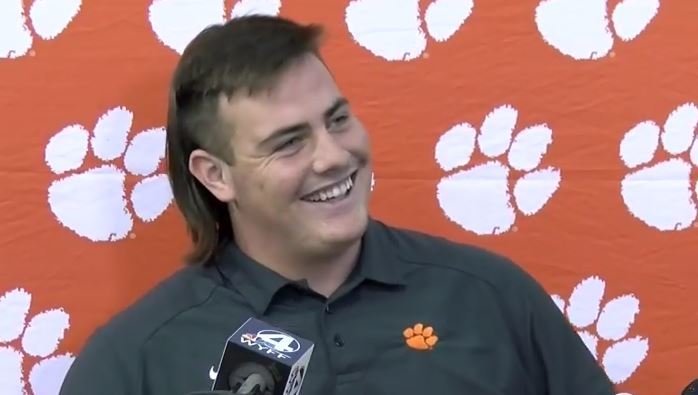 Cade Stewart proudly shows off his mullet to the media.

Clemson center Cade Stewart and his legendary mullet have been a topic of conversation around the football operations center for years. Coaches laugh about it. Teammates have differing opinions on it. But it was glorious and gaudy all at the same time.

However, Stewart showed up for spring practice without his famous hairdo. Why did he get rid of it?

“Dude, I know. I don't know, it was a wild hair I got,” Stewart told TigerNet. “And now my neck is really cold all the time. It was right before spring practice started, maybe during mat drills. I just cut it off. I guess I wanted to be a little faster and work on my aerodynamics. I don't know why I did it. I miss it now because my neck is cold.”

Stewart told the media two years ago that the mullet was an idea he embraced after high school.

“I catch a lot of crap for it, I really do, but I’ve embraced it,” Stewart said. “A few years before I came out of high school, my uncle died in a car wreck, and my dad and all his brothers had mullets. And I was like, ‘When I get out of the house and I’m able to have my own hairdo, I’m going to grow a mullet.’ Then I shaved it off, and now I’m growing it just for fun. I kind of enjoy the mullet now.”

“Cade’s mullet, it can be nasty at times, but it’s a good look,” Ferrell said with a smile.

Now it’s gone. But it might be back for the fall, simply because centers are known for being the goofiest players at a position known for it’s uniqueness.

“I don't know, I guess being the center you have the responsibility of keeping everybody in the same track. You just want to keep that attitude about you and be the joker guy,” Stewart said. “Keep everybody in a good mood, because if you're in a better mood you have a better practice. You want to keep everybody happy and just kind of joke with them. That makes the day go by faster.”

The Six Mile native and graduate of nearby Daniel High School has extensive playing time on his resume and enters 2020 having played 698 snaps in 37 career games (one start, against Texas A&M last season). He is poised to be one of four new starters on the offensive line but said all of the players have played with each other and he doesn’t see a dropoff.

“We have all kind of meshed together over the last couple of years playing with the second group,” Stewart said. “So, we all understand how each other plays and we have a lot of chemistry. We have all played together and we know each other and now we just step in and play the same ball because we understand each other that much better.”

Stewart redshirted as a freshman but quickly learned that he didn’t have to be a 5-star to earn playing time.

“Any guy that comes in when you're young, stars are what you need to get you here. But when you get here you have to start all over,” Stewart said. “It's a whole new system from what they did in high school. Everything is different. Everybody is the best in their state and everybody is the best at their position. Now you have to perfect your craft every single day and get better. I think that is what a lot of these 4-star and 5-star guys can do. They learn to adapt really well, and that is why we keep getting them.”

Stewart gets the early nod to start at center and he’s been working with all of the quarterbacks in perfecting his craft, mullet or no mullet.

“Before spring ball started we worked a lot on our snaps. And Coach (Brandon) Streeter does a good job during practice rotating guys and we all get a good feel for who does what,” Stewart said. “Me and him (Trevor Lawrence) have been playing together for three years now and we have a good feel for how he likes the ball and he knows how I snap it. Every quarterback is different and they like the ball different, so we have to work on that.”

Will the mullet be back in the fall?