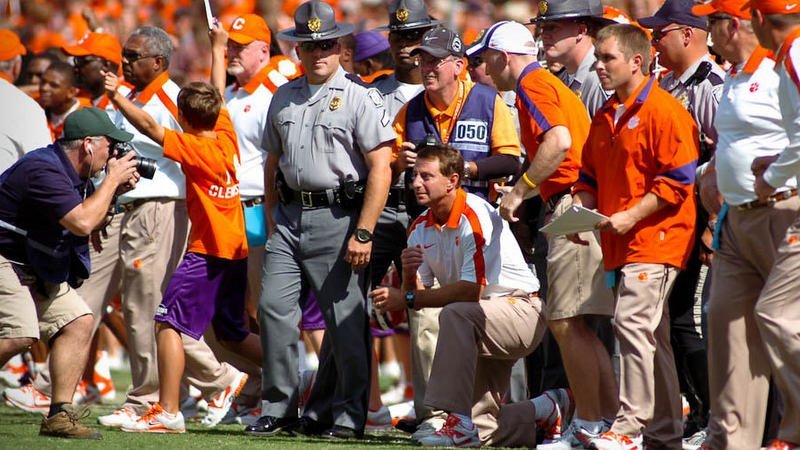 Clemson head coach Dabo Swinney is celebrating 10 years at the helm of the Tigers this week, and perhaps the one clip that elevated the young head coach into national consciousness came after Clemson knocked off defending national champ Auburn at home in 2011.

The Tigers had appeared in one ACC Championship Game in 2009 and lost to Georgia Tech and suffered through a 6-7 season in 2010. That included a 27-24 loss at Auburn that helped propel those Tigers to a Cam Newton-driven national title.

No. 21 Auburn entered the game that day riding a 17-game winning streak and the momentum of a national championship, but the nation’s longest winning streak ended thanks to a 386-yard, four-touchdown afternoon from Clemson quarterback Tajh Boyd (making just his third start), and 155 receiving yards from freshman sensation Sammy Watkins. In all, the Tigers amassed 624 yards, while outscoring Auburn 31-3 from the midway part of the second quarter on.

Trailing by 14 points on two different occasions, including 21-7 following Michael Dyer’s second touchdown in the second quarter, Boyd got Clemson rolling with a four-yard touchdown pass to DeAndre Hopkins, a six-yard score to tight end Dwayne Allen, who tight roped the back of the end zone, and then 65- and 19-yard scoring passes to Watkins.

Swinney was interviewed on the field after the game and gave props to Boyd.

“Unbelievable. Cool. Cool. Cool. Ice water in his veins,” Swinney said of Boyd. “I just couldn't be more proud of him. We had all kinds of guys stepping up. We are going to enjoy this tonight, but we have a conference team coming in here next week in Florida St. I hope they come in here undefeated.”

However, the most-played moment of the day came when Swinney shook with excitement while explaining how his team was able to win the game and also giving a glimpse of the Tigers’ future.

“It's what I told you before the game. Our team believes,” Swinney said. “Our team believes and they've got heart. We've got greatness in us. It's what I told them - you've got greatness in you but you have to make a decision to be great. They made a decision to be great today. And I can't think of a better place to end this streak than Death Valley, South Carolina, baby!"

The Tigers went on to defeat Florida St. and Virginia Tech the next two weeks, giving the Tigers three wins in a row over ranked teams. The team later defeated Virginia Tech to win the ACC Championship before losing to West Virginia in the Orange Bowl.